Sensō-ji Temple has got to be one of Tokyo’s most visited tourist spot in the city. Located in the Asakusa neighbourhood, and also called Asakusa Kannon Temple, it’s often the sight most associated with Tokyo tourism, dominating the covers of pamphlets and brochures outlining the sights of Tokyo. Having said that, what’s most identified with is not the temple itself.

The grounds around the temple are as much, if not more so, the attraction to visit. The temple’s main hall is a spectacular building and if you are of the faith likely a humbling place to visit, but there is so much more to see around it. What most people think of when they hear Asakusa or Sensō-ji Temple is probably the outer gate to the complex, Kaminarimon, or Thunder Gate. This is the huge gate marking the start of the approach to the temple and is known for it’s massive red lantern hanging in it’s passageway. It also has an impressive set of Nio, the large fearsome statues on either side of the gate.

Once you pass through the gate you are confronted by Nakamise-dori, a long shopping street leading to the inner gate of the approach, Hozomon. This is a great place to find souvenirs to bring back home and also to sample various food specialties of the Asakusa area. It’s along this street that we found several snacks which we share in our accompanying episode. It’s a real spectacle, so many tourists taking in all the shops and watching various food vendors prepare their goods. The crowds were not too bad on the day we visited but remembering from past visits it can get very cramped along Nakamise-dori. 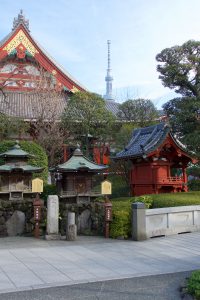 Once you make your way past Hozomon you’ll find a giant incense burner where temple visitors purify themselves by waving smoke over their heads. It’s also said that the smoke has a healing property and that waving the smoke over your head can make you smarter. Past the cloud of smoke you’ll come to the steps leading up to the main hall of Sensō-ji. Here you can make your prayers and make donations and even light a candle. It’s a beautiful building, don’t forget to look up to see the paintings in the ceiling.

This is where many tourists stop their tour of this complex, including ourselves on past trips. We couldn’t imagine that there was even more to see on top of what we’ve already experienced. But behind Sensō-ji there is a beautiful garden with streams, bridges, statues and several smaller shrines throughout. There is also the shinto representation of the area Asakusa Shrine. And don’t forget the 5 story pagoda, which is hard to miss. It would be easy to take an entire morning or afternoon exploring just this one sight. One thing to note, while the temple and area have a very long history (the temple was established in 645), part of that history was the devastating bombings of WWII. Much of what you see today are very recent reconstructions. That has never really taken away from an experience for us, nor have we ever really thought much about it. 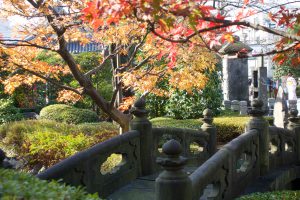 Before we headed out to Sensō-ji we had to find breakfast. Despite my desire to eat a breakfast of onigiri every day, Nicole had other ideas and we ended up at McDonald’s. There is a location conveniently close to our hotel which allowed a quick return to our room before heading out for the day. Despite being dragged I have to admit it was quite enjoyable. We don’t have McDonald’s back home very often at all and so it was a nice treat. That treat was made better by the option of trading in the hash brown which comes with the breakfast combos for an apple pie, at no extra charge. Needless to say we both ended up with apple pies, Nicole finally satisfying that craving she had from almost the first day of our trip. The reason she craves an apple pie when we travel to Japan is because unlike at home the apple pies are deep-fried. Back home they are baked to be more healthy. But nothing beats a deep-fried pie.

The trip from our hotel to Sensō-ji Temple is an easy one on the subway. The main stop is Asakusa Station on the Ginza and Asakusa subway lines. Lucky for us the Asakusa line goes through Shimbashi Station which is attached to our hotel via the Shiodome underground complex. From the station it’s a 15-20 minute ride. Once at Asakusa Station the start of your pilgrimage, Kaminarimon, is easy to find. Either follow the crowds, or keep an eye on the signs pointing you in the correct direction.

After our visit to the complex we decided that it was finally time to satisfy a desire I’ve had since our first trip back in 2007. To visit the Asahi Beer headquarters, where they have a bar on the 22nd floor with amazing views over Sensō-ji and the surrounding area. Unfortunately we were a little underwhelmed once up there. We didn’t stay, which I maybe regret a little bit now. But at the time we were shocked by what we found and given our limited time decided to leave. Next time though, maybe a quick beer is in order to at lest say I’ve had a pint of Asahi at the headquarters. We shall see. 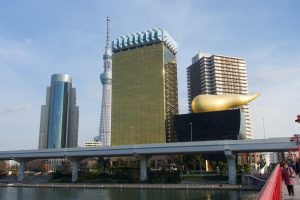 Despite our disappointment the sight of the buildings have always been exciting. The main tower, a gleaming gold, is the primary headquarters for Asahi. Right beside the tower is a building probably most associated with Asahi, a black cube with a giant gold accent on top. It’s a really unusual sight, but spectacular. The black cube was designed by French designer Philippe Stark. It’s called the “Flamme d’Or” which translated means flame of gold. It’s especially intriguing at night when lit up. It was built by shipbuilders using techniques of submarine construction. It is now a concert hall and supports the performing arts. Beside both buildings is another Asahi bar and izakaya called the Asahi Craftsmanship Brewery where you can get bar food and limited run Asahi beers.

Before we closed out part 1 of this episode we came across a street vendor selling roasted sweet potatoes, another Japanese staple and one I had been craving. We were rushing to our next sight, but we were also running out of time on this trip and this was the first sweet potato vendor we’d seen. We decided to give it a try. It was a little firmer than I was expecting, but the slow roasting really develops the sweetness of the potato. It was a good snack and fuelled our, well mine as Nicole is not a fan, fuelled my hurried walk to the Ueno area.