One of the things Nicole really enjoys are gardens, and Japan has many top notch gardens to visit. Even small little gardens in parks or on the grounds of a shrine are impressive. The attention to detail and the constant pruning creates a beautiful space to enjoy. It was this promise of a beautiful garden which drew us to our next destination for the day.

Episode 1 left us enjoying a roasted sweet potato we picked up from a vendor next to Sensō-ji Temple, and we mentioned that we had to hustle to make it to our next destination for the day. Episode 2 picks up exactly there, as we make the 40 minute walk from the Sensō-ji Temple area to the Ueno area to visit a place called Kyu-Iwasaki-tei Gardens.

We tend to make these sort of walks often, avoiding taking the subway or bus as it offers us a chance to explore otherwise missed areas of the city. We try to do this in most places we visit, and it generally leads to us finding some interesting things, and usually being behind schedule. Often times the interesting things we find while exploring Japan are smaller and often very quiet shrines and temples. Our walk today was no exception as we happened upon two temples along the way. 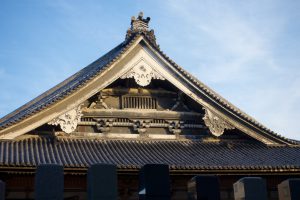 The first was a large building and unfortunately the route we took had us on the opposite side from the entrance into the grounds. We had to marvel at it from a distance. The second temple was much smaller and our route took us right past the entrance. We took a quick look at the grounds which were as expected, perfectly manicured. This temple had a large bell in it’s tower, a few statues and a sign with some English, which is unusual. Unfortunately I was not able to track down the location of this temple, even with the name which I poorly recited in the video. And with that stop, as usual, we were behind schedule and really had to hustle.

We arrived at Kyu-Iwasaki-tei Gardens just before the sun started to set. It’s right beside Ueno park which was another destination for the day, but we’d have to return for that as we’d run out of time. Kyu-Iwasaki-tei Gardens, despite it’s name, seemed more about an old residence building which has been declared an important cultural asset. There is a lot of history wrapped up in the site where the current building resides. It was originally owned by the Echigo Takada Clan back in the Edo period and was the location of their local housings which were used when they would visit Edo. The current building is interesting because it’s separated into two primary wings, a western style wing and a Japanese style wing. That was unusual at the time it was constructed and the reason for it’s current status as a cultural asset. It was really neat to see some of the details of the building, including the second floor veranda which is not a popular thing in Japan, especially when constructed in the late 1800s. But we of course were more interested in the Japanese wing to see how the family lived day to day.

Unfortunately there was a lot of renovations being performed on the building, most of it was covered in scaffolding, and some of the interior was closed. We also didn’t really see much of a garden. We are not sure if that is because we missed it as it was late once we arrived, or if there isn’t one. They definitely have a lot of grounds, but it seemed to be just open field, not the typical Japanese style gardens Nicole was hoping for. We wouldn’t recommend a visit here as it’d take away time for other sites in Tokyo, especially on a first or second trip to the city. But if you are interested in seeing early western influences on Japan and enjoy architecture, this might be worth investigating. And we’re sure once the renovations are complete it will be a stunning building to see.

In terms of sight seeing we had run out of time for the day. By the time we were leaving Kyu-Iwasaki-tei Gardens it was dark out and most sights would now be closed. It was time to eat! Nicole had a hankering for either hot pot or shabu-shabu and we’d scoped out a place on the walk to the residence. We headed back there for dinner. It’s a restaurant on the third floor of one of those typical buildings full of restaurants on every floor.

This place called Shinbase was excellent. The soup pot, more of a cauldron really, had two separate compartments so we could get two different types of soup. That worked out perfectly because Nicole selected an extremely spicy soup which I couldn’t handle. We ordered a spread of meat, beef, lamb and pork and some shiitake mushrooms so we felt like we got our veggies. And in the blink of an eye, it was all gone. We must have been hungry because we devoured it all, and were left still hungry. We finished up and headed out to find meal number two.

We wandered the shopping streets around Ueno Station, an area where the space under elevated tracks are well used. We eventually came across a restaurant that we would normally shy away from, but for some reason on this night we decided to give it a go. It was a tiny little yakitori restaurant, spilling out into the alley way, using thick plastic tarps to keep diners warm and literally right under the tracks. There was a restaurant employee out in the alley at the time we were passing by and a quick peruse of the menu, and promise of an English one inside, we agreed to go in and he ushered us to a table. It seemed like the table was full and we’d have to wait, but he barked at the dinners and they all shuffled down and made room for us at the end. 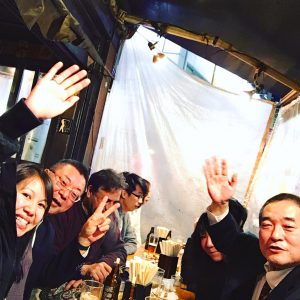 It wasn’t long before the man sitting beside me broke the ice and started to speak English with us, excellent English. I forget what was said to break the ice, but he and his friend sitting beside Nicole were our buddies for the night. They were self-proclaimed Japanese businessmen, or salarymen as Nicole clarified to their amusement. They helped us with the menu and we ordered some amazing food, skewers of meat mostly. Our conversation spread to the next couple down the table, an older Pakistani man who had been in Japan for 15 years, and a younger Japanese woman. They both were able to speak some English and we all had a great time eating and drinking, taking selfies and asking each other the burning questions we all had. Us asking about things that confused us about Japan, them asking us about Canada and wondering if New York is actually a war zone, which they seemed to think.

It was an incredible experience. Anytime we are able to connect with locals like that we’ve had the best time. It can be extremely intimidating for me to put myself into a situation that allows for a connection like this, but it’s worked out every single time in Japan. This one is fighting for the top spot with an experience we had at a small Kushikatsu restaurant in a back alley of Takamatsu several trips ago. Our salarymen friends had to run as they had to catch a train at Ueno Station, we all said our goodbyes. The man sitting beside me was so gracious he bought us both drinks before he departed.

Energized from the experience, and slightly drunk from all the sake, I settled our bill and we headed out. We literally turned the corner and found a place pumping out taiyaki hot and fresh and I couldn’t resist. Taiyaki are a traditional sweet made of an almost pancake style batter stuffed with a sweet red bean paste. To some that might not sound too good, but I love them, and to get one fresh off the pan was exciting. We watched the cook making a bunch of taiyaki, one of which would be mine. They are made in the shape of a fish, a Japanese red seabream to be exact, utilizing a special metal pan. He first layered some batter, then a chunk of the red bean paste, topped with more batter and he then closed the pan to cook them. It was about a 3-4 minute wait, and it was fully worth it. The taiyaki was nice and fresh, the batter a little crunchy, and the filling very slightly sweet and hot. 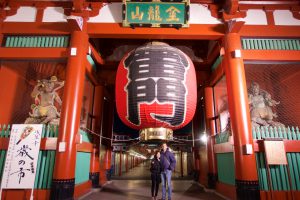 We decided that we needed a walk after having two dinners and thought it would be neat to end the day where it began, at Sensō-ji Temple. We made our way back to the temple, taking in some sights along the way. Once we reached Sensō-ji we were shocked to find it almost abandoned at only 9:30pm. The grounds were quiet and all the buildings and gates were brilliantly lit up, which made for a lot of really good photo ops. We explored everything we had seen earlier in the day and got an outstanding photo together under the big red lantern of Kaminarimon, the Thunder Gate.

Satisfied with an awesome day we made our way back home to our hotel for a well deserved full nights sleep. Thanks for coming along on our adventures! 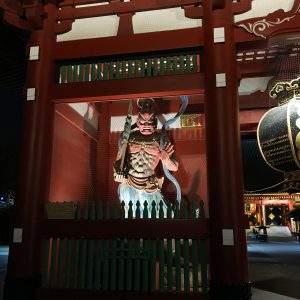