We woke up to a beautiful morning on our first day in Tokyo. One of the things we love about the hotel we stay at is the amazing view of Tokyo Tower and on a clear day such as this one, all the way to Mt. Fuji. We planned to visit one of our favourite places in Tokyo today, Meiji Shrine. 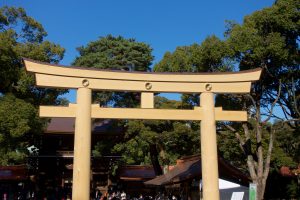 Located in a 170 acres forest, Meiji Shrine is a special place to visit. Right next to the famous Harajuku district of Tokyo the walk leading up to the main shrine complex is peaceful and refreshing after being jostled about by the hustle and bustle of Tokyo. Even on a busy day visiting the shrine will recharge you as everyone is respectful and calm.

The forest is partly made up of 100,000 trees donated by people all over Japan back when the shrine was being built starting in 1915. It’s an impressive green space in almost the centre of Tokyo connected with Yoyogi park, a large green area in it’s own right. The walk from the entrance beside Harajuku Station, one of three entrances, should only take about 15 minutes to the main shrine complex. It will likely take you longer as you will no doubt meander taking in the sights, stopping to take photos of the giant wooden torii and the wall of colourful sake barrels on offer to the shrine. 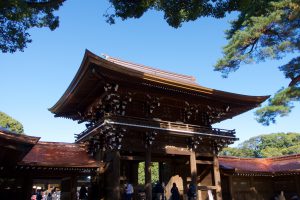 The spirits of Emperor Meiji and his wife Empress Shōken are enshrined here, but this is not their grave site, that is in a town South of Kyoto. The grandeur of this complex goes to show the importance of Emperor Meiji’s role in guiding Japan down a path to the country we know today. This time was called the Meiji Restoration and involved the modernization of Japan along with the adoption of many Western ideals. While taking several liberties, as Hollywood often does, the Tom Cruise movie The Last Samurai takes place during this period and depicts some of the consequences of this drive to modernization. It was likely a very tumultuous time for the country. We highly recommend a visit to Meiji Shrine, a place of extreme importance for the country.

Before we set out for our visit we needed to find some breakfast. Unlike the rest of our trip our hotel stay in Tokyo did not include breakfast. We had to fend for ourselves for the next week. Not a problem, we were in Tokyo, the options are abundant. On our first morning I opted for a convenience store snack of a few onigiri and a bottle of tea. Onigiri are rice balls with some sort of filling and wrapped in a seaweed sheet. This could be an early morning addiction as even the off the shelf onigiri were satisfying. One was a spicy tofu and the other was roast salmon. Unfortunately in my extreme hunger I committed a major faux pas, which I know better of, but wasn’t thinking clearly. I ate my onigiri on the subway! That is a frowned upon activity in Japan on most trains it seems except the long distance ones. Luckily it wasn’t very busy and I didn’t notice any concerned stares, but don’t make the same mistake I did.

Nicole isn’t big on the convenience store meal scene generally, we were still on the hunt for something to satisfy her hunger. Somehow we managed to find a place making really quality cheese tarts in Omotesando called Pablo. The cafe of sorts was really cute, and had a well thought out layout, you’d get to watch the tarts being made as you waited in line to order. We decided on a slice of their original cheese tart and a couple individual tarts, a cheese one and a special Christmas themed one. They were all very good, but the original was our favourite.

Both fully satisfied we headed towards Meiji Shrine, a short walk from Pablo as it was located in the Omotesando area right next to Harajuku. In fact the main road going through Omotesando heads directly to the entrance of the shrine, a planned feature back when the area was being developed for Meiji Shrine. 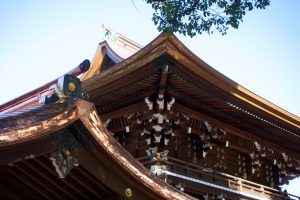 As expected our visit was a nice peaceful one and we enjoyed taking in all the sights as we made our way to the main shrine complex. It wasn’t too busy on this Sunday, which was a little unexpected. Once we reached the main complex we were shocked to see gleaming copper roofs on many of the buildings surrounding the shrine. It was our first time ever seeing a brand-new roof of this sort and it took as aback. I never really stopped to think how any of these types of buildings or complexes would appear when brand-new. As it turns out there was a fundraiser going on to raise the necessary funds to replace all the roofs to commemorate the 100 year anniversary of the shrine. 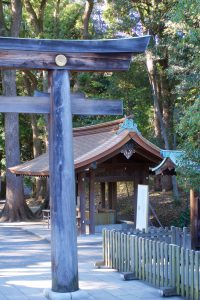 After taking in these impressive new roofs we made it to the main square of the complex where the shrine is actually located. It’s a big square completely enclosed keeping in all the activity that was going on around us. People taking in the sight in front of them. Others making their prayers to the spirits of Emperor Meiji and Empress Shōken. Some were writing prayers on ema, the wooden plaques that would be hung around a spiritual tree. And one of the most impressive sights to witness is a wedding procession making their way from one end of the square to the other. We must have seen 6-7 processions during our visit and wondered what it took to get to host a wedding at the shrine. Our time in the square was quite leisurely, we were not in a rush and we tried to take in every little corner we possibly could. But eventually had to make a move. We didn’t exhausted all the buildings to visit on the grounds tucked away in this forest around the shrine. If you’re interested in making the most of your visit do research the shrine to get a sense of all it has to offer. Here is a site that does highlight many of the others buildings which likely go unvisited by most tourists such as ourselves. It’s not particularly detailed in information, but does give a quick highlight of the area. 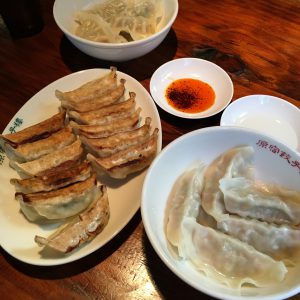 By this point we were getting hungry again, our breakfast was wearing off. A quick google search for best food in the area led us to an extremely busy gyoza restaurant a short walk back into Harajuku. The restaurant is rather small and has an interesting layout. An open kitchen in the middle surrounded with wrap around counter seating and a few tables on the perimeter. The kitchen was hopping, pumping out plate after plate of gyoza. Gyoza are half-moon shaped dumplings generally stuffed with mixture of pork and vegetables. This restaurant does two varieties of filling and two varieties of cooking method. They have their original recipe which sounded like a traditional gyoza, and the second offering was heavy on the garlic and leek. Once you select your filling you can then have them either steamed or pan fried. The pan fried are first steamed and then one side is seared to create an interesting contrast of the soft steamed top and crispy fried bottom. We ordered a plate of each type in each preparation method. They were outstanding and well worth the over an hour wait spread out between waiting in line and then waiting for our order to be filled. We also tried a beansprout dish they offer, steamed beansprouts severed with a spicy minced meat sauce over them. This was an excellent starter to get the hunger really going, not that we needed any help with that by this point. 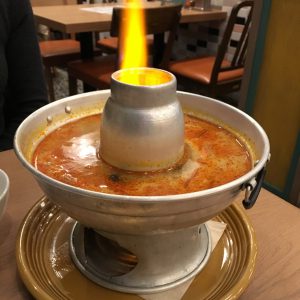 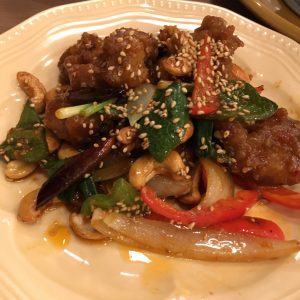 By this time it was getting quite late in the day. We headed back to the hotel to regroup and figure out our evening. We were not planning on anything too ambitious for the evening as we did have to set aside some time to research some plans for the rest of the week. We decided to go to the Ginza, a short walk from our hotel and find food in one of the big complexes there. We settled on the Tokyu Plaza Ginza where we found some amazing authentic Thai food for dinner. Nicole ordered a flaming tom yum soup while I opted for a stir fried chicken dish. Both were excellent, although the portions a little on the small side. But that was alright because it left room for a convenience store run to round out the day.

We ended out day researching the rest of our days in the hotel room and catching a good nights sleep.