We had a great start to the day. The weather was perfect and the scenery was beautiful. We’d been making our way up to Whistler in Episode 1, making 3 stops along the Sea to Sky Highway. We got to learn about mining at the Britannia Mine Museum and got to see a couple spectacular waterfalls, Shannon Falls and Brandywine Falls. All that exploring had us hungry and happy to finally arrive in Whistler where food could be had.

We settled on a Mexican restaurant for a late lunch, and the place was busy. I opted for a burrito and Nicole chose tacos. I really enjoyed my burrito, unfortunately Nicole wasn’t too keen on her tacos. We walked around the village a little bit, getting a sugar fix at Dairy Queen (Nicole soon forgot about her taco woes) and I got a caffeine fix at Tim Hortons. 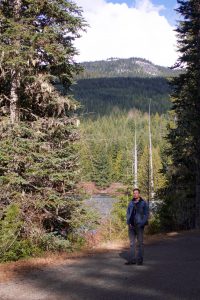 First up was a hike to find the Lost Lake. Whistler has an abundance of hiking trails, the trail we took out to Lost Lake was very easy, well maintained and rather accessible to all I would say. It was wonderful to get some fresh air and be in and among all the beautiful scenery we’d seen along the drive up. It wasn’t long before we reached our destination, Lost Lake. It was spectacular. We found what is called The Big Dock, a wooden dock extending out into the lake. We walked out to the end to have a short rest and take some photos. We sat at the end of the dock, staring out over the lake, past the lush green of the forests at the base of mountain vistas. It was postcard worthy. It felt like we were recharging being out there in nature. 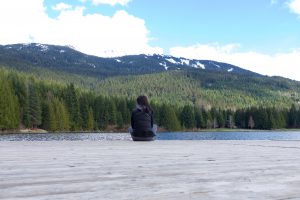 After our short break we continued along the trail which continued around the lake. We reached Lost Lake Park which had a beach on the lake and more beautiful views. We took another break, mainly to just take in all the beauty around us. Once our eyes had their fill we headed back along the trail to the parking lot where we left the car. It had been an amazing day so far, and we still had some exploring to do. 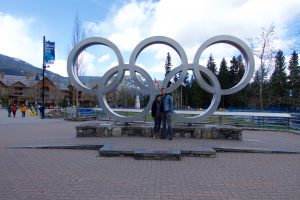 Last on our trip to Whistler was strolling around the village. We were not quite sure what to expect when we decided to make the trip up here. All we knew was that this was the site of the 2010 Winter Olympics, and that is evident as you walk around. There are still the Olympic Rings which were busy taking photos with all the tourists, ourselves included. You’ll also find the Olympic Plaza which was the site of all the medal ceremonies each night of the olympics. And don’t miss the Olympic cauldron, still burning. You’ll also find a ton of shops and restaurants, some unique brands we’d never heard of, but a lot of the usuals as well. We walked the length of the village which started to get a little repetitive, all the buildings looking the same. We turned back when we hit the gondolas, shutdown for the season, the hills they service more brown than white at the time of our visit. 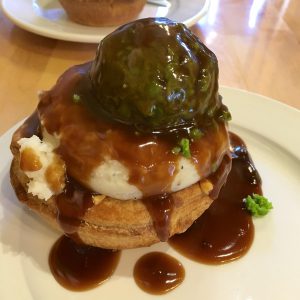 It was starting to get late and we had to make a move back down to Vancouver. But before we got back on the road we decided to find some food for dinner. A quick survey on Google Maps and we found an intriguing sounding restaurant serving up Australian style meat pies. We headed over to Peaked Pies to find out what exactly a peaked pie was. It turned out to be amazing, a hot meat pie topped with mashed potatoes and mushy peas drenched in gravy. I opted for the full peaked experience, while Nicole had her pie naked. We were really impressed by the food, it was delicious. This place was doing a great job representing Australia here in Whistler.

Stuffing ourselves right before jumping in the car for a two plus hour drive in the dark might have been a bad idea. I was really struggling keeping my eyes opened during the drive back home. We made a couple stops along the way, one because we were trying to hit up one last destination, and the other mainly to take a break from the drive.

Before getting out of Whistler completely we wanted to try and see the Olympic Park, but unfortunately it was closed for the season. We were quite happy they had that well signed as the drive up to the park is 40 minutes roundtrip from Hwy 99. But instead we turned around and continued heading back down the See to Sky Highway.

It was pretty late by the time we arrived in Vancouver. We had to make a quick pitstop to fill the car before dropping it off at Budget. The Budget lot was packed, a lot of people were returning their cars after-hours. We found a spot, dropped the keys in the after-hours dropbox and made the quick walk home. We were exhausted and collapsed into bed. I was really happy it was Saturday and I had Sunday to recover before work began on Monday.

We hope you enjoyed this two part episode making the trip up to Whistler along the Sea to Sky Highway.