Our big Whistler excursion left us feeling pretty wasted the day after. Whistler was wonderful, we fully enjoyed the drive up with our various stops, and then Whistler itself. If you missed that two part episode check it out, episode 5. But after that long drive home in the dark and getting to bed pretty late I woke up needing a heavy dose of caffeine. 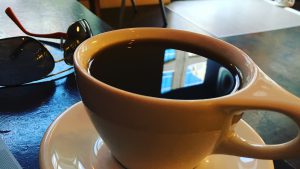 And so first up on my priority list was a visit to our favourite local coffee shop Rocanini Coffee Roasters. It was the perfect way to ease into the Sunday, a nice fresh pour over and a little creative work. I’m cursed with a rather punctual internal clock, I wake up pretty naturally at the same time every day, usually despite what time I got to bed the night before. Nicole on the other hand can sleep whenever and wherever. We’ve labelled this her super power. While she continued to sleep I chilled at the coffee shop.

Once I had my fill I swung by the condo to pickup Nicole. By the time we headed out it was late in the morning, pretty much time for lunch. Nicole suggested we head back into Chinatown so we could visit the Chinese garden we missed on our last visit, but also to return to the Chinese bakery we found. That place was pumping out some legit steamed buns so I was down for another sampling. 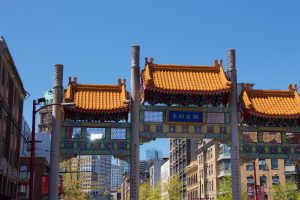 New Town Bakery is an amazing place because of the quality steamed buns, called bao, they produce. While we sat in their restaurant sampling various bao we watched massive bamboo steamer after massive bamboo steamer being wheeled out from the back kitchen to the shop at the front. On our way out I spoke to a lady who appeared to be an owner and she said they make thousands of bao a day. I can believe it.

After mistakingly taking a number from their machine thinking we order our food and then go sit down, we were corrected by the staff and shown to a booth. It was tough narrowing down which bao to order. I settled on a few steamed bao, a chicken, a minced pork and vegetable and a dessert bao, a black bean paste, along with a baked bbq pork bun, which I heard was a specialty. Nicole ordered a steam Chinese sausage bao and a bowl of duck noodle soup. When the food was delivered it was a little daunting, their bao are good sized, we had a mountain of white steamed bao on our table.

First up was the baked bbq pork bun which was very good but quite different than what we’re used to getting in Toronto. The filling in Toronto is generally a lot redder and sweeter and the meat is in chunk form. The bun from New Town has a dark brown filling of shredded meat which wasn’t very sweet at all. And the bread itself is where you get a hint of sweetness. A very good bun. Next I attacked the steamed bao and chose the chicken bao as my first victim. The bun itself was nice and fluffy but not too flavourful on it’s own, which makes perfect sense because it’s really there to be a vessel for the filling. The chicken filling of this bun was spectacular and really blew me away. The filling was kind of like a little meatball that was stuffed into the white outer bun layer. It had a good ginger and green onion flavour which complimented the chicken perfectly. This bao ended up being my favourite. Before tucking into the dessert bun I had one more savoury to try, the minced pork and vegetable. The filling was also a little meatball and was quite dense. The pork flavour wasn’t as strong as the chicken flavour of the previous bun. Definitely the chicken was the better bao.

I had a bit of a surprise when I took a big bite of the dessert bun. While I ordered and kept saying that it was a black bean paste bao, in my head I was hearing black sesame bao. Black bean paste is definitely not black sesame, so I was a bit disappointed unfortunately. But the bao was still pretty good, not as sweet as I would have liked to round out the meal.

Nicole really enjoyed the sausage bao, which was quite large for such a bao. But she raved about her duck noodle soup. She made short work of that large bowl while I filmed my reactions to the mountain of bao. 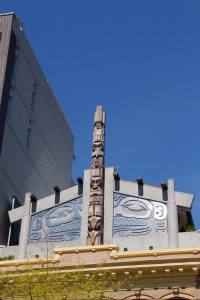 After lunch we walked over to the Chinese garden, officially called the Dr. Sun Yat-Sen Classical Chinese Garden. We were bummed to find that it was under repair. The pond, which appeared to be a large part of the garden, was emptied and being dug out. We were then a little shocked to find that they were still charging full price for admission even though more than half the garden was closed. We opted not to go in. (But spoiler, we cracked and did go visit the garden on a later day, video coming soon!)

After a quick pitstop at the condo, when we finally tried the candied salmon we bought at Granville the week before, we decided to head back to Granville to pick up a few things. There we found a big gaggle of baby geese and a very busy Granville Island. The day before when we rented the car for Whistler, the guy at the rental place mentioned that they were really busy because 3 large cruise ships had come into port the night before. That explains the number of tour buses bringing in cruisers. It was madness. We quickly got the things we needed and retreated back to the condo where we devoured one of our “things”, more Lee’s Donuts.

We hope you enjoyed this rather random day. Overall it was a chill day to recover from Whistler and to prepare for the coming week.