Yesterday was an amazing day exploring the Vancouver Aquarium, but because we enjoyed it so much, time got away from us. By the time we were kicked out of the aquarium there was little time to explore the rest of the park. We had to make the call to head home and come back the following day. That goes to show just how large Stanley Park really is, expecting to be able to see it all in one day was silly of us.

Stanley Park is a beautiful large green space nestled on what’s basically an island between downtown Vancouver and North Vancouver. After getting a chance to visit the aquarium and the famous totem poles we had one more sight, or series of sights, to see in the park. Our plan for our return into the park was to walk the Stanley Park Path which runs around the perimeter of the park on the seawall. It promised spectacular views and sights, and we were looking forward to a leisurely stroll after a jammed packed previous day.

We had a few things planned for first thing in the morning before heading back to the park. The first was the Vancouver Lookout, a tower in downtown Vancouver which first opened its doors in 1976. It’s no longer the tallest structure in downtown but still offers spectacular 360 degree views of Vancouver and beyond. On a clear day you can even see Burnaby off in the distance, right on the horizon. 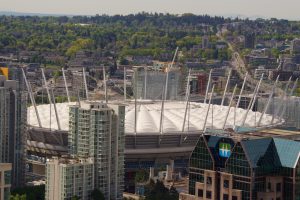 We hoped that by heading there first thing we would avoid the crowds as there were several cruise ships still in port. It was a warning we heard several times during our month in Vancouver, when there are cruise ships in port the sights get crushed with visitors. Despite these best intentions we struggled to get out as early as we planned, but luckily we were still early enough to beat the crowds. We had the lookout almost to ourselves and were able to get our fill of the views without feeling rushed. I always try to do this type of attraction as early in a visit to a new city as possible as I find it helps give a good lay of the land. But that didn’t happen on this trip, so instead we had the fun of seeing all the places we had already visited from a different perspective. It was neat seeing BC Place from way up there, and our condo right beside it. We also got an amazing view down over Canada Place and the visiting cruise ships, and just beyond that Stanley Park. 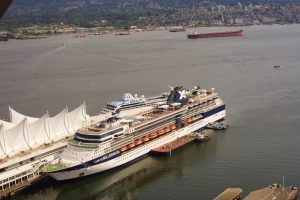 Vancouver Lookout is very well maintain and presented. Lots of signs posted highlighting the major sights out of all the windows along with good historical descriptions. It helped bring Vancouver to life and made us appreciate some of the places we’d already visited that much more.

Once we’d been all viewed out we headed back down to street level to find some breakfast. We had two recommendations from a local we’d met before heading up the lookup, luckily relatively close together so we could check them both out. We chose one of the two recommendations, a place called Save On Meats.

We didn’t realize it when we selected it, but Save On Meats had a long history in Vancouver. Today a restaurant and adjoining butcher shop with the goal of providing high quality meat for a reasonable price. They take pride in providing the community with a quality option which is hard to find these days at a price which is accessible to more than just the Whole Foods crowd. It was a neat story and in the accompanying episode we have a short interview with one of the managers on staff while we visited.

We both really enjoyed our breakfast, more brunch by this point. I had their fried chicken on waffles and Nicole had a breakfast sandwich with a side of hash browns. My fried chicken was delicious, I especially enjoyed the combination of the savoury chicken with maple syrup. The waffles were pretty good, but the chicken was clearly the star of my plate. Nicole’s breakfast sandwich was a monster, I was impressed she finished it. And her hash browns were almost more like kettle chips. We were both very satisfied after our meal at Save On Meats, and we were ready for a fun afternoon exploring the Stanley Park Path.

Having purchased a 2-day pass to the hop on hop off bus we were able to grab that back into Stanley Park. If you get the right driver the bus ride is a lot of fun and very informative. They are constantly sharing info about the sights passing by and it’s a great way to learn more about Vancouver’s history. We took the bus all the way to the totem poles in the park and decided that would be our starting point on the path. For the first leg of the walk we’d have sights back towards downtown Vancouver, including Canada Place, and once we hit Brockton Point the view changes towards Lion Gate Bridge and the entry into the bay.

As we started out the walk I really enjoyed pausing and enjoying the view of downtown. Vancouver has a great skyline, I would have loved to have found the time to return after dark for some night photography. It was also fun watching the seaplanes coming and going from the harbour. They were nonstop and I wondered if they shuttling tourists around for views or were they primarily taking passengers somewhere.

It wasn’t long until we hit the Nine O’Clock Gun which we had first learnt about up in the Vancouver Lookout. The gun was originally used to signal fishermen that the days fishing was done and to return to port. They still fire the gun today but unfortunately we’d missed the firing for the day. It’d be an experience to witness it fired right up close as you can hear it as far as Granville Island on the other side of downtown. 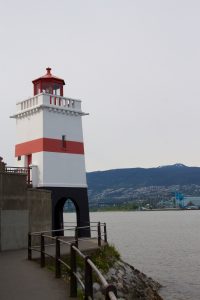 The next stop along the path was Brockton Point and it’s lighthouse. The views out over the bay were the highlight of the point, the lighthouse more a modern structure. As you round Brockton Point towards the Lions Gate Bridge you can see the huge yellow sulphur pile on the shore across the bay.

Our goal was to make it all the way to the base of the Lions Gate Bridge but we were running out of steam. We ended up finding a park bench at a beach along the path and took a rest while enjoying the view. It was a great way to end our walk, taking in the fresh air while watching all the activity out on the bay.

Even after our rest we decided to call it a day and not continue to the bridge. There was a bus stop very close to where we sat and we made our way over there to wait for the bus. The ride back to downtown took a different route than we had gone the previous day and we got to see some ancient old growth trees and a great view of the bridge from a slightly elevated position. 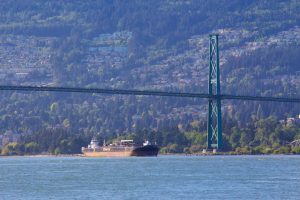 As we made our way back to downtown we started to discuss dinner and decided on getting sushi to take home and enjoy a quiet night on the couch. Lucky for us there was a stop very close to Samurai, the place we had gone the previous night. After loading up on sushi we started to make the walk back home and passed a bakery we’d passed many times. It has always been very busy no matter the time of day. We usually press on telling ourselves we are being good by skipping a baked good, but our defences were weak and we went in to take a look. It was easy to see why they were always so busy, their baked goods looked amazing. And as we’d find out later also tasted amazing.

Back home we unpacked dinner, plopped on the couch and enjoyed a repeat of the unreal Samurai sushi and sashimi. The perfect way to end the second long day in a row. We were making good use of our long weekend so far. One more day to go!