We were definitely settling into our lives in Vancouver by the midpoint of our first week. Getting up early to start my workday around 6am meant ending the day around 1-2pm, generally skipping lunch. On most days so far we’d get a workout in right after work, have lunch and then head out of the condo for some exploring. 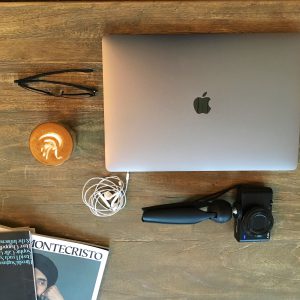 One of the things which we were enjoying was heading to a coffee shop for a few hours in the late afternoon if we didn’t have a bigger plan in mind. On Wednesday we did exactly that, spending a few hours at our favourite local coffee shop Rocanini. On this particular afternoon they had a playlist full of awesome songs from our teenage years. It was such a great vibe and it helped propel our few hours of work. We weren’t the only ones digging this particular playlist as we egged on one of the employees to continue his awesome dance moves on camera.

Thursday we had more ambitious plans, deciding to go explore Chinatown. We always enjoy heading to Chinatowns in whatever major city we are visiting to see how they all differ from one another. Vancouver’s Chinatown has the reputation of being one of the cleanest and largest in North America. Chinatown is centred on Pender Street with the main commercial areas being found on Pender, Main and Keefer Streets. 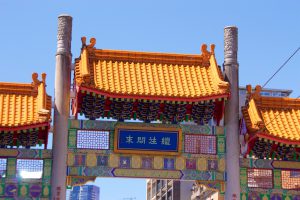 We came at Chinatown from an odd direction, mainly because I wanted to see Chinatown Plaza and the statue in Memorial Square. Chinatown Plaza is known for it’s 45 foot neon sign hanging on the side of the building. It’s a small shopping mall with an equally small food court. The neon sign was a sight to see, and we could only imagine how impressive it must be lit up at night. Memorial Square houses an important monument in honour of Canadian Chinese’s sacrifices in building the Canadian Pacific Railway and in serving Canada during WWII. Interestingly the bronze statues which flank the 20-foot high concrete “Zhong” character were cast in China by Chinese sculptor Shu Ren Cheng. The Zhong character symbolizes moderation and harmony.

As the time ticked by Nicole started to worry that we’d miss the shops and so we hustled over to Pender Street to see what it had to offer. We came across Fuling Gifts & Houseware, the exact old school kind of shop you’d expect to find in every Chinatown. Nicole loved browsing the shop, reliving memories from her childhood visiting such shops back in Toronto’s Chinatown with her parents. The shop had everything you’d need to stock your home from religious goods, to cooking goods, to all sorts of home decor items. Nicole even found a pair of old school slippers she has been hunting for in every Chinatown we’ve visited in the past five plus years, including in NYC and San Francisco. She was thrilled as that style of slipper which she loves hasn’t been made for years, perhaps decades now. 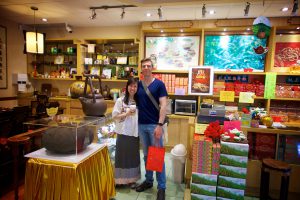 After exploring every nook and cranny of Fuling and a similar store with a more modern feel, Bamboo Village, we found ourselves in Ten Ren Tea Shop. Nicole is always on the hunt for good tea, and after a tasting, she had narrowed in on a few to take home. We have Ten Ren back in Toronto, and they are located all over the world, but we didn’t realize the quality of tea they carry. For some reason we had a bad impression of the chain.

Tea and slippers in hand we started to make our way back home for dinner, when low and behold, we came across an awesome looking Chinese bakery and restaurant called New Town. There was no passing it by, we both dove straight in. It was a busy place, people darting in to pick up some steamed buns, egg tarts, or other various baked good on offer. We opted for an egg tart and traditional pork filled steamed bun. I was blown away by the selection of steamed buns, and the massive production of said buns going on. We don’t have a place like this in Toronto anymore, pumping out steamed buns like New Town. We do have bakeries where you can find really good baked goods, but the steamed buns had me fixated. We both agreed that we would return for a meal in their restaurant behind the bakery before we left Vancouver.

Our egg tart and pork bun did not make it home. Nicole could not help herself and pulled out the steamed bun. I didn’t protest, hunger was starting to set in. The bun was excellent! We could imagine how amazing it would be fresh out of the steamer. We took mere steps before Nicole pulled out the egg tart. I again didn’t protest. The egg tart was excellent. A nice smooth, not overly sweet custard nestled by a nice flaky crust. Our snack really ratcheted up our hunger so we beelined it home to make dinner. Cod from Granville Island was on the menu for the night. 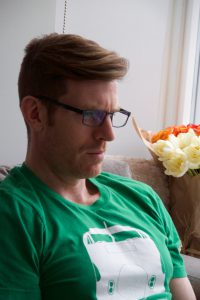 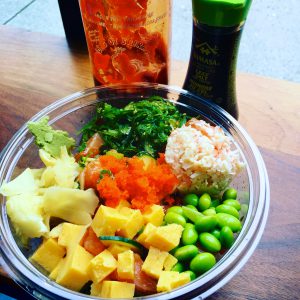 After finishing up our last workday for the week, and after a little convincing from me, we were off to Pokerrito for a late lunch. It didn’t take that much convincing to be honest, their poke bowls are excellent. As we sat down with our bowls ready to eat we realized that it had been exactly a week earlier that we had our first meal in Vancouver at Pokerrito. We followed up our lunch with a stop at a donut shop I researched in preparation for the trip, Cartems Donuts. It was a quick walk over to their Downtown location on Pender Street which has a wide variety of donuts and a decent amount of seating. Cartems specializes in both yeast donuts along with cake donuts. They’re known for their exotic flavours, such as smoked maple walnut (which I indulged in), honey parmesan and earl grey, to name a few. 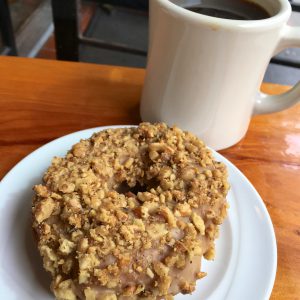 Earlier in the year San Francisco took our precious Muji umbrella in a wild rain storm, and so we were on the hunt for a new one. Lucky for us a Vancouver institution was right next door to Cartems, The Umbrella Shop. I had never seen such an array of umbrella types and styles before. Out of all the choices we settled on a small purple umbrella we felt was perfect for travelling and is quite a bit studier than the plastic Muji umbrella it was replacing. Unfortunately after several decades of operation the family run business has shut it’s doors forever.

We headed home for an early night. We’d need plenty of rest as we had a full day planned for Saturday, a visit to Whistler and several fun stop along the way.