We were entering the last leg of our trip to Japan. Leaving Osaka and heading back to Tokyo where we’d set down roots for 7 nights in the more familiar surroundings of the Shiodome area in Minato Ward. We had one last Shinkansen trip ahead of us on the very first Shinkansen line in Japan, the Tokaido Line. Our JR Rail Pass was done after today, and we used it well, taking a total of 11 trains to each of the 7 cities we visited. It’s been a great trip, we saw a lot of new places, but were looking forward to our final week in Tokyo.

Because we knew the trip from Osaka all the way to our hotel in Tokyo would be an easy one we decided to leave Osaka in the evening giving us one more chance at visiting the shrine we missed the day before. After our last great breakfast at our Osaka hotel we ventured out taking the train to JR Namba Station, which by now was quite familiar to us. We mentioned in a previous post that it’s one of few well situated stations on a JR line which allows us to maximize our JR Rail Pass.

We hustled and made short work of the 25 minute walk from the station to the shrine, Ikukunitama Shrine. Our walk was easy if not a little unpleasant as it took us along a major and busy road. Once we got closer we noticed a side street marked with a stone torii and sure enough that was the route Google Maps was taking us. We were relieved to see the big orange gates open as we approached the shrine complex. It surely would have been very bad luck for it to be closed, but we were a little silly not to double check before we headed out.

As we walked through the gate we were immediately happy we rushed to make this visit. The grounds were beautiful and lush, and there seemed to be something interesting to see in every little corner. We sat on a bench partly to catch our breath from the walk, but also just to take in the sight in front of us. It was another example of a peaceful and tranquil spot nestled in a noisy and bustling city. We started to wander around the grounds and came to 4 smaller shrines lined up along one of the exterior walls to the complex. They were each slightly different, and rather elaborate. They all had a torii marking their entrance and were gated off. The whole sight of them was impressive.

As we continued along we came across a koi pond beside a little waterfall causing a pleasant gurgling sound as the water followed it’s path down to the pond. It was oddly covered in netting and plexiglass, and we could barely make out the koi underneath. It was around here that we remembered that we still had to go visit the main hall which we could see towering up through the trees.

We continued wandering along the path towards the main hall. It’s approach from the road was marked by a massive stone torii, had a large purification station (called Chozuya) and was itself gated off from direct visitation by elaborate and beautiful buildings. Once up close we could see into the shrine and noticed a lot of sake barrels on offer. It felt very quiet and perhaps a little less explored by travellers such as ourselves.

Ikukunitama Shrine has an interesting history, originally built in the site of the current Osaka Castle. During a battle it was completely destroyed and before it could be reconstructed Hideyoshi Toyotomi chose the site to build Osaka Castle. The shrine was relocated to it’s current location. The main hall was constructed using a new innovative style for the time housing all the pavilions under one roof. Unfortunately it suffered greatly during WWII bombings and the current structure is relatively new, built of concrete, utilizing a copper roof.

We sort of lost ourselves exploring the complex and suddenly realized the time. We were in a bit of a crunch because we still had to pack and checkout of the hotel, and we needed to make a quick shopping trip to the market we found the night before. Nicole had a genius idea to solve a problem that developed in Osaka, we amassed too much stuff for our suitcase. This is a trick she’s used in the past and we’ll share it in a future video once back in Tokyo. But needless to say, we were really in a time crunch now.

We hurried back to JR Namba Station for one last time, stopping along the way to make our purchase. We were in such a rush that we didn’t notice that we jumped on the wrong train and had to double back to catch the correct one. A 20 minute mistake! Luckily it all worked out, the hotel gave us a later checkout time so Nicole and I were able to enjoy the facilities one last time and get packed up to leave. 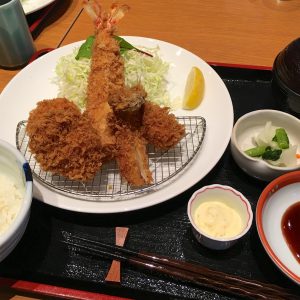 It was mid afternoon by this point and we hadn’t eaten since our breakfast earlier in the day. Having checked out and stashing our bags with the concierge we ventured out to find some food. I had an idea, and was able to convince Nicole, and tonkatsu was our option for a late lunch. We found a branch of Maisen in the maze that is Osaka Station and lucked out getting a table with a view down into the train station from the Daimaru Umeda building. Maisen has always impressed and today was no exception. Nicole opted for the massive prawn set and I felt like a variety so I chose a set with a prawn and various croquettes and battered and deep fried pork. It was delicious! Maisen also does train bento boxes, which I’ve tried once before, and it too was very good.

Full and content we had to, yes, rush back to the hotel, grab our bags and make it back into the station to catch our local train connecting Osaka Station with Shin-Osaka Station, the latter being the main hub for Shinkansen in Osaka. As expected, and once we fought through the crowds of Osaka Station, the trip was an easy one. A quick ride to catch the Shinkansen, then a 3 hour trip to Tokyo Station where we transferred to a local train on the Yamanote Line for a quick ride to our final station, Shimbashi. We then just had to make the familiar walk through the Shiodome complex to our hotel. By this point I was ready for bed, Nicole of course slept on the train and was rested and ready to go. After freshening up at our hotel we went to find some food and made the odd choice of a Spanish themed restaurant and both ended up ordering pizza. It was a little lack lustre, especially after the fantastic lunch we had at Maisen. But I think we both felt like some comfort food, we’d been away for 3 weeks by this point, and after complaining about the pizza both had to admit we quite enjoyed it by the time it was all gone.

Finally we crawled into bed, surrounded by a mess of luggage and laundry that we’d deal with in the morning. It felt so good to be comfortably in bed after a long day.