As soon as we decided on Vancouver, literally 5 minutes after committing, my mind went to one specific spot. I’d wanted to go to this spot ever since I was a kid, watching an old CBC TV show called Danger Bay and going through a phase of wanting to be a marine biologist. I almost made it there in the early 2000s when I visited Vancouver for business, but unfortunately we didn’t have time and walked right past it.

You’ve probably guessed the spot I’m talking about, mainly because the title of this entry gives it away. The Vancouver Aquarium has been on my bucket list since I was 9 years old. When I was young I went through a phase of wanting to be a marine biologist. I would be glued to the TV watching nature shows on whales, sharks and the ocean in general. I was the perfect young audience for a CBC TV show called Danger Bay. The show centred around a marine veterinarian who worked at the Vancouver Aquarium. That is how I first learnt about the aquarium and have wanted to visit it ever since.

As I mentioned I almost got a chance in the early 2000s when I was in Vancouver for work. I was there for 3 or 4 days but unfortunately was meeting clients at the hotel at the airport. We stayed there in one of their business rooms working away trying to pack in as much collaborative work as possible. We only pulled ourselves away for one afternoon. We rented a car and drove to Stanley Park, walked around the park and right past the famous statue of an orca out front. So close!

Roughly 15 years later I was finally getting my chance to walk through it’s doors and explore the aquarium which featured so prominently in one of my favourite childhood shows. Surprisingly we were playing it close, saving it for our last weekend in Vancouver. Luckily nothing unexpected happened, such as an emergency closing. We wouldn’t have had a second chance.

It was Saturday of Canada’s May Two Four long weekend, more properly known as Victoria Day Weekend, and we were starting the day as we usually do, running behind schedule. We had planned a packed weekend to take advantage of it being a long one as well as our last weekend in Vancouver. Nicole had purchased us a package which included 2 days worth of rides on a hop on, hop off bus and discounted access to many of the attractions around Vancouver. Saturday was going to be all about exploring Stanley Park, as we’ll see though, things didn’t go to plan. 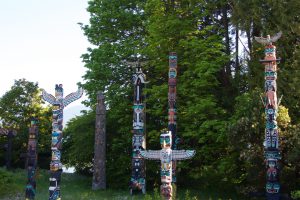 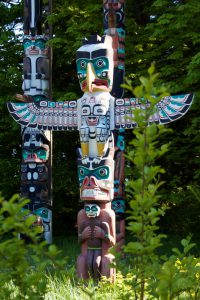 Our first stop in the park was the famous totem poles at Brockton Point. They are beautiful representations of BC First Nations artistry tucked away in a little grove. These totem poles are mainly replicas as the originals, mostly carved in the 1880s, are now in museums for preservation. It’s easy to spot the varying styles representing the different areas of BC from which they originated. They are spectacular and make for an outstanding picture opportunity.

Even though we got out later than planned we still managed to make it to the totem poles and then walk over to the Vancouver Aquarium just as it was opening. Our goal was to visit the aquarium first thing hoping to beat what would surely be a dense crowd of long weekend visitors. After taking some photos of the orca we walked through the front gate and were finally, FINALLY, inside the Vancouver Aquarium. I made it! 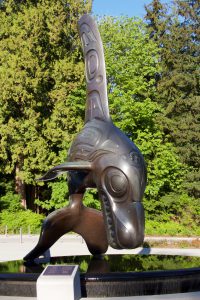 I will admit, I felt a bit like a big kid. I wanted to run everywhere and take in every aspect of the aquarium all at once. Childhood memories flooded in and I felt an odd sense of nostalgia. Our first stop was the giant aquarium tank which housed all sorts of marine life. A couple species of sharks, some rays, a giant sea turtle and loads of various types of fish were all swimming around in this giant tank. We also lucked out on being in the right place at the right time to see the sea otter morning feeding. As I commented in the episode, those little suckers are so cute. I think generally who’d have a sense that otters are cute little creatures, but like many things you can’t quite understand just how cute until you watch them swimming around and interacting with each other in person. 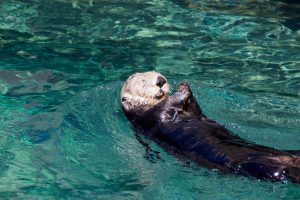 We then did something that seemed a little odd but later in the day would prove to be a brilliant idea. We had lunch in the aquarium cafe around 11am, beating the crush of the crowds at lunchtime. In the episode I commented how lunch seemed reasonably priced considering we were in the aquarium, but in retrospect I wasn’t quite thinking clearly. It was a bit pricey! But we both enjoyed our meals and seeing as we’d be in the aquarium for lunch there wasn’t much of an option. 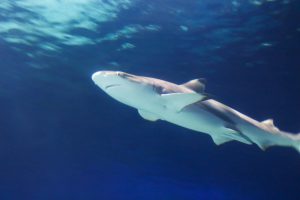 With lunch out of the way we had a full afternoon to explore every nook and cranny of the aquarium. For the full experience check out the accompanying episode of our travel vlog, but I will call out the Discover Ray pool and jelly fish exhibits. Although, they are just the tip of the iceberg!

Note: Unfortunately it appears that the Discover Ray pool has been closed down. I haven’t had much luck finding out why, but it’s no longer at the aquarium. You can relive the fun in our episode! 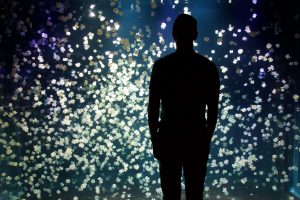 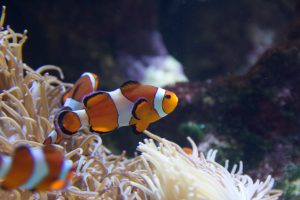 I mentioned earlier that the day did not go as planned. That might have sounded a bit ominous, but actually was ok because we had so much fun at the aquarium we spent over 6 hours there. That was not our original plan, we budgeted 2-3 hours at the aquarium and the rest of the day to explore other areas of Stanley Park. We could not drag ourselves out of the aquarium, we were dragged out at closing time. It was such an amazing experience, and one fully worth the long, long wait. If you ever visit Vancouver I would highly recommend a visit to the aquarium, Canada’s largest and 4th largest in North America.

After lingering around the orca statue for awhile, getting some great shots as the crowds very quickly dispersed, we headed over to the bus stop. We caught the hop on hop off bus back to our neighbourhood and retreated home to regroup for a few hours. Well, more than just a few hours. By the time we reemerged it was rather late, but we were in search of food.

The previous night’s meal was so successful that we were looking for a repeat experience. If you caught our last episode you’ll know that we gorged ourselves on sushi, and we were after that again. We picked a restaurant which was just down the street a block from last nights restaurant. This night’s place of choice is called Samurai Japanese Restaurant, and it did not disappoint. The sushi game in Vancouver is incredible. We kept getting blown away not only by the expected freshness of the fish but also the unexpected generosity in the amount of fish used. Sashimi pieces felt often times twice as large as you’d get in Toronto. Rolls were always busting at their nori seams. Samurai Japanese Restaurant continued that trend and we enjoyed our spread immensely. And it was a rather large spread because we were starving by the time we reached the restaurant in the late evening. As we were eating we realized that we hadn’t eaten since the 11am lunch at the aquarium, almost 12 hours ago.

After our late meal we stumbled home full to the brim with outstanding sushi and got into bed. We had a crazy long and packed day, and were planning to do it again tomorrow.