The shrine tour continues on our third day in Osaka. This particular shrine was one we had seen quite a few pictures of while planning our visit to Osaka and even a few other YouTubers we follow had visited. We’d been looking forward to visiting Namba Yasaka Shrine ever since we put Osaka on the itinerary eight months prior to the trip. 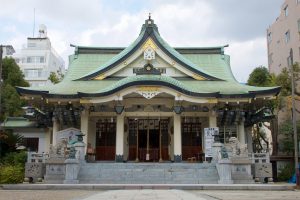 It’s a very beautiful shrine, quite a marked difference from Osaka Tenmangu Shrine which we visited in episode 20. For one Tenmangu is a much larger complex with many more buildings, but what sticks out most for me was the colour contrast between the two. Tenmangu is dark, all the building are a dark wood, whereas Namba Yasaka is a beautiful white with gleaming gold accents. The roof of Namba Yasaka is exceptionally striking especially with pockets of blue showing through the fluffy white clouds.

Namba Yasaka Shrine is also a lot quieter than Tenmangu Shrine, often times we had the whole place to ourselves. I think I’m starting to show my preference, but only because we were able to see both. If I had to choose just one it’d be a tough call but I would probably lean towards Tenmangu as there’s more to see and it seems to be a more important shrine. But I’d urge you to make a visit to both work!

The other really, well, shocking aspect of Namba Yasaka Shrine is the building in the shape of a lion head. It’s a relatively small building, more of an elaborate stage really. But the visual of this building is astounding and really quite unique in our travels of Japan. It’s definitely a great selfie spot! Those looking for luck in school or business often come to pray at the lion head stage as it’s thought to swallow evil spirits bringing good luck. Standing there staring up at the stage I can believe it, it’s got a big mouth.

What we can see today at Namba Yasaka Shrine is but a mere piece of what used to be a very large complex of shrines and temples which over the years have been reduced to this one primary shrine. It was once that Buddhism and Shintoism lived in harmony at this larger complex, but the Meiji Restoration, when the two religions were forced to separate, had drastic implications for this complex. It saw further hard times during the bombings of WWII. It is now a beautiful, quiet little corner in Namba, one which we had to force ourselves to leave.

Once we finally did leave we headed to the shopping arcades towards Dotonbori. We were in search of a specific tea shop we saw the day before which had some awesome looking tea soft serve. We tried to make it there the night before after our visit to Uniqlo but unfortunately it was closed. Today we were determined to find it and eat their soft serve.

Along the way we stumbled upon Hozenji Temple which is famous for a moss covered statue of Fudo Myoo, one of the guardians of Buddhism. Worshippers come to pray at the statue and splash it with water which explains the lush green moss adorning the statue. While Nicole knew of this temple, it was a pleasant surprise to have stumbled upon it. It’s said to be a peaceful reprise from t 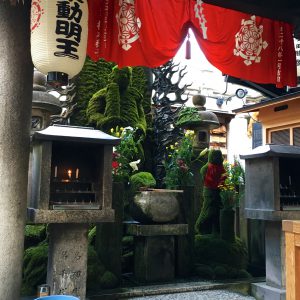 he hustle and bustle in the shopping arcades and streets which surround it, but unfortunately on the day we found it there was quite a bit of construction going on in one of the adjacent buildings. It’s well worth a visit, especially if you are in the area. Perhaps note it’s location so you can plan around it so your visit is not left to chance like ours was.

We were getting hungry and had yet to find the tea shop, and we decided that instead of a sit down lunch we would snack on street foods that looked good to us. Our first stop was not technically street food, although we did eat it on the street. It was a small little bakery which seemed to have a loyal following. As we were making our selections a man came up to us to point out a specific tart telling us it was delicious and that this was his third visit that day alone. How could we pass that up? We also got a caramel croissant. Both were delicious, and I think it’s best to watch our reactions in the episode. That will be far more telling than me trying to explain it here.

After our snack, we did manage to find the tea shop. It was a hopping place. They were roasting tea out front. There was a constant lineup for soft serve. They also had a very good selection of teas which drew Nicole into the shop. They sampled various different teas for us and we ended up walking away with some tea along with our soft serve. They had two flavours, matcha and roast tea. We tried one of each. The flavours were bang on, exactly as you’d expect them to taste.

After an interesting stroll through a slightly sketching neighbourhood with quite a few love hotels and a failed attempt to visit another shrine that had closed we found ourselves in another shopping arcade. This one dedicated to all things kitchen and food. It was amazing! We wandered around visiting various little shops looking at all the kitchen gadgets. Nicole finally found some wooden spoons up to her standards. She had been searching for wooden cutlery to replace some beloved spoons she bought on our earlier trips which were in need of replacing. It was getting close to dinner time so we turned our attention to all the food surrounding us. We lucked out with our timing as many stalls where closing for the day and selling off their prepared food at a good discount. We selected some dishes to take home with us to enjoy in the hotel room.

After a long day exploring we headed back to the hotel for some R&R before we dove into dinner. We can’t speak highly enough of the pool and gym facilities at this hotel. We enjoyed those and then had a nice dinner overlooking Osaka from our room. Despite being end of day sale food it was delicious. Nicole got some eel sushi and giant scallops while I chose a big bowl of tempura on rice.

It was our last night in Osaka, and while the bed looked very inviting by that point we decided to take a walk in search of an illumination. We mainly struck out on the illumination but did make it to city hall and enjoyed a sit on it’s front steps while taking in the late night action around us. By this point we were both exhausted and headed back for some sleep. We had to pack and make our way to Tokyo for our last leg of the trip.