We spent the better part of our day at the Instant Ramen Museum, making our own instant ramen packet and custom cup noodle flavours and tried a Hokkaido specialty ramen in the tasting room. What a fun and engaging way to spent a day! Definitely checkout the museum if you’re ever in Osaka and if like us, you’re a sucker for food related activities.

Maybe we got a little carried away actually, we had another major attraction on the list for the day, Osaka Castle. We had just enough time to make it over to the castle before it closed for the day, but we had to hustle.

Our timing ended up being quite lucky, as we caught the castle in the soft golden light of the setting sun. It cast a gorgeous glow over the castle, accentuating the golden accents of the castle itself. 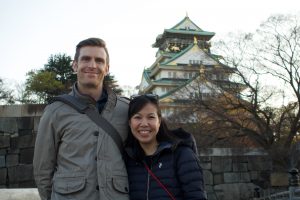 It’s an impressive castle and surrounding park, with it’s massive moat and bridges. There was a sense of peace in the park, despite the large number of people also enjoying the attraction. We really enjoyed strolling through the park, getting teasing views of the castle between trees, or peeking over other buildings. The final approach, among massive stone walls, is really quite astounding. The castle is rather imposing as you round the final wall and get a view of the entire structure.

We were extremely conflicted by this point. We had to make a decision, hang around the outside of the castle snapping pictures in the beautiful last light of the day, or head into the castle to explore its museum and get a view over Osaka from its top floor. 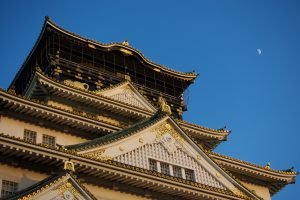 We chose to visit the castle museum, but not before taking as many pics as possible in 5-10 minutes. This castle is a reconstruction, the original lost to battles long ago. The current structure dates back to the 1930s, experienced damage during the bombings of WWII, and then repaired to what you will find today. Because of this the interior is very modern with conveniences we’re accustomed to in this day and age, such as an elevator. The museum has a lot of relics, including an impressive array of samurai armour to check out, along with a good amount of information on the history of the castle and an important figure in Osaka history Hideyoshi Toyotomi. He was responsible for the first Osaka castle, beginning its construction in 1583.

Unfortunately we didn’t have a lot of time to explore every nook and cranny of the museum, but did make it to one of our goals, the observation deck on the top floor of the castle. The views out over Osaka are impressive, a perfect spot for a castle and keeping watch over the land. From the observation deck you can also get an interesting glimpse at the details of the roof, including the golden fish. These are actually called shachihoko and are the combination of the head of a tiger and body of a carp. In Japanese folklore these creatures could summon the rain which is why they are often adorning the top of castle and temple roofs, to protect the structure from fire. 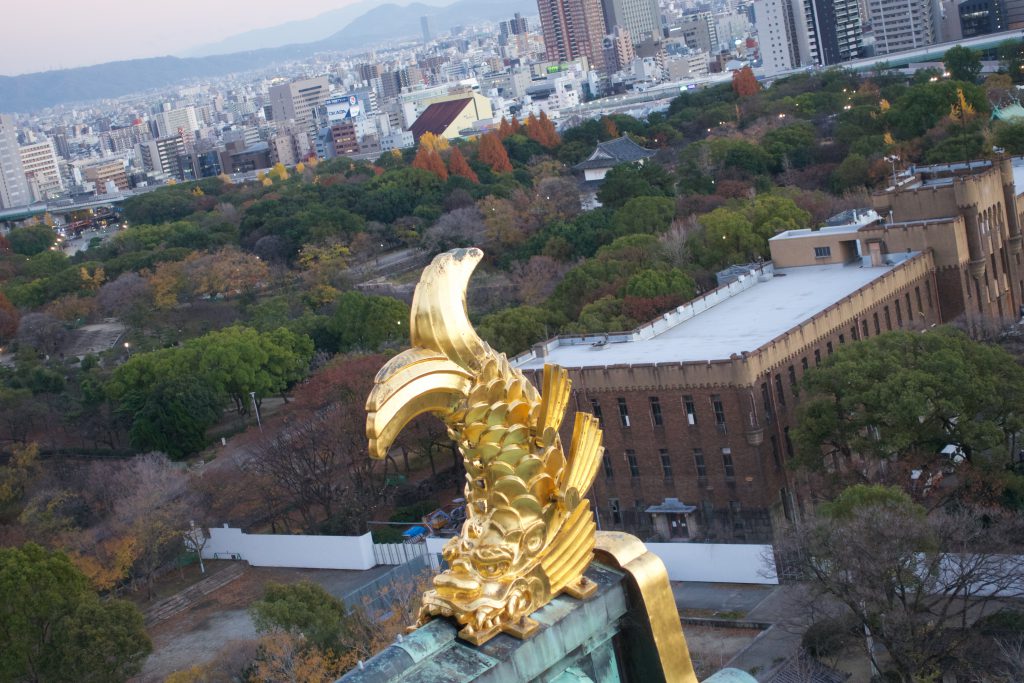 It wasn’t long before we had outstayed our welcome and were told it was time to leave by the playing music which got increasingly louder and louder. It was a rather confusing experience as the music chosen for this task was Auld Lang Syne, the New Years Song. But we obliged and made our way back down.

By the time we were back in the park out front of the castle it was almost completely dark, just last bit of light glowing on the horizon. By now it had been hours since our ramen tasting back at the museum and we were quite hungry. We started to make our way out of the castle park back to the train station. On our way out we came across a little building complex with a statue of Hieyoshi Todyotomi in their square. It was a lovely stroll out of the park, a lot quieter now in the dark than earlier as we made our way to the castle. 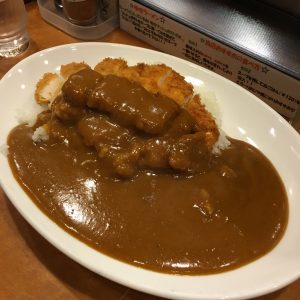 Our hunger was really mounting by now, but we luckily had a specific restaurant in mind. We wouldn’t have to hunt down a place to eat, we just had to hunt down this specific place, which sometimes can be even more challenging. I guess not too bad these days thanks to iPhones and Google Maps. This place was a curry rice shop and was highly rated. We both were to be satisfied as I ordered curry rice with a deep-fried chicken cutlet, while Nicole opted for the curry ramen. The ramen was interesting because one of their special ingredients is a small pile of instant potato added along with more traditional ramen toppings. The idea is to stir in the instant potato to thicken up the soup. Both dishes were really good and hit the spot. 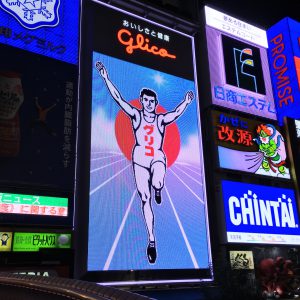 Full and content we decided to take a quick stroll through Dotonbori, a famous tourist spot known for its use of neon. We planned to return here for a proper visit, but were relatively close by and I really wanted to see the iconic running Glico man sign.

By this point we were both exhausted having had an amazing, yet long day out. We’d sleep well and be prepared for our second full day exploring Osaka.