The day had finally come for us to experience an attraction we had booked months prior and had been looking forward to ever since. It seems to go by several names, The Momofuku Ando Instant Ramen Museum or The Cup Noodles Museum. Either way, it’s all the same, an amazing museum where you can learn the history of instant noodles and details about it’s manufacture.

The museum is easily accessible using either a local train, or if like us you want to maximize your JR Rail Pass, a JR train. From Osaka Station the local train line to take is the Hankyu-Takarazuka Line which will take you to Ikeda Station. It’s then only a 5 minute walk from the station to the museum. Or if like us you do want to use your JR Rail pass, the line to take is the Tokaido-Sanyo Line to Kawanishi-Ikeda Station. It’s a bit more of a hike, about a 30 minute walk to the museum. Full disclosure: the local train option would have only cost us about $3CAD each. We’re funny like that! 🙂 The advantage is that the walk exposed us to some more of Osaka we would have missed!

The museum itself is extremely well presented, and is easily accessible to English speaking folks like ourselves. It does a good job of showing off the history of instant ramen and it’s creator Momofuku Ando without being in your face about it. What’s even more subtle, perhaps more so to us English speaking folks, are the points at which they show off how they manufacture instant noodles. The main reason we came, the instant noodle making class, is all about learning the process, but then there are other lessons, such as during the custom cup of noodle workshop. 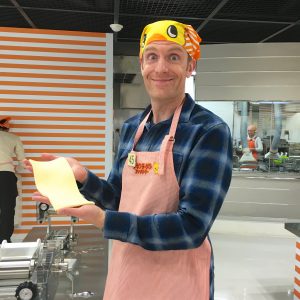 But yes, the main reason we came to the museum was to participate in a class which takes you through the process of making your own instant ramen from scratch. They have the act of running the classes down to an art, as it’s extremely well thought out and very efficient without feeling rushed. While we did make the instant ramen from scratch attempting to replicate at home would be futile. This is less about actually learning how to recreate instant ramen at home, and more about seeing all the steps involved, and witnessing the Aha! moment Momofuku Ando had during it’s invention, the deep frying step. The noodles are cooked with steam, and then deep fried to remove all the moisture, which is what makes the hard noodle we are all used to finding in our instant ramen packs. It’s really a form of dehydrating, which Ando coined as “flash frying”. Genius!

Here is the website for the museum. There is an English version and it does a really great job of explaining all there is to do at the museum. It’s recommended to make reservations for the instant ramen making class called the Chicken Ramen Factory on the website. Unfortunately the reservation website is not in English and we were not able to figure it out. There is a phone number you might have some luck calling to make the reservation. One option which we almost didn’t think about was using the concierge service which came with our credit card. That service was made for this sort of thing. We were able to have them make the reservation for us without issue. Also note, the museum entry itself is free, but there is a charge for several of the attractions inside, such as the class, the Cup Noodles Factory, and the tasting room. The fees are really nominal, $6CAD for the class is the most expensive.

In part 1 of this episode we make it to the museum and take the instant ramen noodle class in the Chicken Ramen Factory. Come follow along to see the process!