The big day that countless fans and one sleepless guy were waiting for had finally come. U2 kicked off their big concert tour to celebrate the 30th year anniversary of the release of their Joshua Tree album. We’d been in Vancouver for two weeks and we had to deal with U2’s incessant practicing that whole time. Given my schedule of heading to bed early to rise early their late evening jam sessions were not appreciated.

I kid of course, mostly. It was a little challenging going to bed at 9pm so I could wake at 5am feeling rested when U2 were practicing until 10-11pm. Hopefully the accompanying video does a good job at demonstrating how loud it was from our condo. But on the flip side it was amazing to be getting little mini U2 performances for the better part of two weeks. And because this concert was to celebrate their Joshua Tree album, they played a lot of oldies we both really like.

We started the exploring post-work portion of our day as we usually seem to, heading out for a caffeine fix. The place we chose for this Friday took us right past BC Place, by now a familiar route in our videos. The little plaza which houses the Terry Fox statues was buzzing with excitement as fans were starting to congregate. The excitement was helped along by a bunch of booths setup by what seemed like local radio stations. They were pumping out music, giving away swag, and a few had photo booths setup. Before continuing on to the coffee shop we opted to wait in line for a Joshua Tree album cover themed picture. It’s now a nice reminder of our trip. 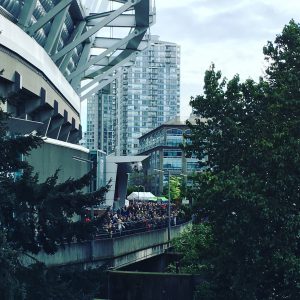 After getting our fill of all the excitement we continued along Beatty Street past more sights of massive crowds trying to get into the stadium ahead of the concert. It was pretty crazy to look down on BC Place from W Georgia Street, which gave a great view, to see just how massive the crowds were. I was happy not to be down among them.

Our destination was Prado Cafe, a hip little coffee shop where I opted for a flat white over a pour over which had been monopolizing my caffeine choices. The shop is run by Sammy Piccolo who is a four-time Canadian Barista Champion among other accolades, including being the first ever winner of the World Latte Art Championships. I was anticipating an excellent cup and I was not disappointed. It was hard to not run back up to the counter for a second round once the last drops of my flat white were gone. 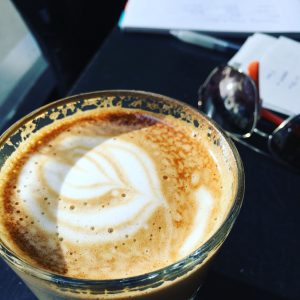 We had a schedule to maintain if we wanted to get back to our condo with food to catch the concert from our balcony. We left Prado and headed up W Hastings Street exploring a section of Downtown Vancouver we hadn’t yet seen. We past by a place called Hastings Warehouse advertising $4.95 food all day. We mocked the place, expecting it to be a dive at that price. But looking it up later I found out that it looks like a pretty neat place, mainly a cocktail bar. The $4.95 advertisement then made sense. It was a draw to get you in to drink. Further along we came across the Church of Scientology of British Columbia. An interesting looking building for a church. More strip mall like than typical church. We made the obligatory Tom Cruise crack and continued on. We had noodles to pick up!

It wasn’t my initial choice for dinner, but once we arrived at Kung Fu Noodles to pick up Nicole’s meal I was once again sucked in. The place is amazing. I know I’ve raved about it many times now, but I must again. Even a year later, writing this, I’m drooling at the thought of the amazing food this place pumps out. And a little more educated on their dishes this time around we both managed to pick exactly what our cravings were after. I of course had to get another one of their burgers which didn’t make it home.

As we headed back home, food in hand, we walked past BC Place again. It wasn’t out of our way, it’s just located such that we often found ourselves walking past it heading out or returning home. It was still happening. The warm up band was playing already and I was a little shocked how many people were still showing up at the venue. Or perhaps there was a lot of people planning to hang around and enjoy the music from the outside.

Back at the condo, comfortably seated on our couch, noodles unpacked in front of us and balcony door wide open, we dove in for dinner. The food was on point and we made short work of it. Enjoying the concert going on mere steps from our condo. The food didn’t last past the warm up band. In fact there was a rather long break between them and the main event. I’m not a big concert goer so I don’t know if that was normal, but it felt like a long time. Eventually U2 came on and the set list we’d been hearing for the past few weeks start to play. It was really amazing just how good it sounded from our couch, we could make out each song and easily sing along to Bono’s vocals. It was a magical night. We just hung out together enjoying what felt like a private concert. We went to bed very happy!