Welcome to a new series, and new experience for Nicole and I. We have travelled to Vancouver to spend a month here and we plan to document it all to share with you. There is a couple facets to our new experience for me, and maybe a little less so for Nicole. Please let us explain…

I have never lived anywhere in the world other than in and around Toronto, always being between 20 and 40 minutes from the downtown core. I’ve spent a lot of time away from home, but it’s always been on the go, moving from place to place as we travel around. Putting down roots in a new city and getting to experience it for an extended period of time is totally new for me. This is where Nicole has an advantage on me, she’s had the experience before, spending 6 months in France. We’re only in Vancouver for a month, hopefully one day we’ll get to experience a longer stay like that together, but baby steps for me.

The other facet is that this is not a vacation! We are both working while we are here, not in new jobs, but working remotely. Nicole works for herself, and can generally have this flexibility whenever she wants, but this is a new thing for me. My company has been experimenting with the remote work movement, expanding our adoption slowly. Even though we are all (except a few) local to Toronto we are at a point where we all only come into the office a few times a month. Having existing employees do some remote work stints was the next step, a few, including myself, did 2 week experiments, and one did a 2 month experiment. I’m now testing a 1 month here in Vancouver. We call these experiments because we are still learning and testing ideas for changing a culture which was built on the normal 5 days a week in the office approach to business, to adopting remote work while maintaining some of the cultural aspects of our company which are important to us. It takes a lot of thought and careful consideration, but is a very exciting direction for several reasons. Being able to travel more and experience more new places is one of the reasons I’m obviously excited about it.

Of all the places in the world to choose from you might be wondering how we decided on Vancouver. There were several motivations behind that decision. The first was that we always wanted to visit Vancouver. Looking West from Toronto I always viewed Vancouver as a place in tune with nature. I always felt that being naturally healthy was apart of the Vancouver identify, I guess British Columbia in general. And that was appealing. Also, this area of Canada just looks spectacularly beautiful, so different than Ontario which is beautiful in it’s own way. Having mountains as part of the landscape would make this a different experience than another city in a relatively flat area, which would be more similar to Toronto from this point of view. We will now be able to check off both coasts of Canada as we visited Newfoundland in 2013.

Another major motivation for Vancouver was removing many variables from the remote work experience. Working this remote from HQ comes with a bunch of challenges and stresses regardless of where, but staying in Canada removes a bunch. We won’t have to deal with a language barrier, or worry about currency conversions, and my mobile phone will just work. And while there are cultural differences it’s still Canada. That all takes a load off! From a work point of view the time zone is a comfortable shift from HQ in Toronto, being 3 hours behind. That will allow me to keep my schedule on Toronto time without much difficulty which means I can work 6am to 2pm local time in Vancouver, giving me the classic 9 to 5 coverage with HQ. The side benefit to that is I can shutdown for the day early in Vancouver and get a bunch of time to explore the city. As work still requires that remote workers have overlap with Toronto time this will work really well. My first experiment last year was from Europe which meant I often worked into the evening to maintain overlap which wasn’t as conducive to exploring, unless I could get up early and get out in the morning. A few people worked remote from Asia, and they were working 11pm to 2am to maintain overlap. That was a bit rough! Once we take more steps into remote work and we can remove the need for so much overlap more places open up that have drastic time zone differences.

And so on a Thursday night we flew out of YYZ excited for our new experiences, though Toronto didn’t let us go easily. There were severe thunderstorms blowing in that evening, engulfing Pearson airport just as we were heading to the gate for boarding. We weren’t held up boarding, but we were held up leaving. On top of the weather the ground crew found a scratch on the aircraft’s fuselage which took them 40 minutes to inspect before clearing us for flight. I had never heard of such a thing being a worry, but there’s a first for everything. After an hour and a half delay, which we spent on the airplane, we were off. We were lucky to have gotten an aircraft with a newly refurbished interior and it was quite comfortable. It was the same interior of the plane we flew to YVR on our way to Japan last year. So while economy was obviously no where near as nice as our business class experience on that previous flight, it was definitely a major improvement on older interiors.

Deboarding at YVR was a pleasant experience, mainly for the speed at which we made it out, thanks to the domestic flight avoiding customs. After picking up luggage we made it to the light rail where we caught a train into Vancouver proper. By luck, not planned, our airbnb was right on the line, it was a short 10 minute walk from Yaletown-Roundhouse station. We were in our airbnb about an hour after landing, which was amazing! Kudos to Vancouver, getting into downtown from the airport was easy and cheap, the trip was only $7.50 each.

Friday was our first remote work day and first chance to do a little exploring. I was desperate to find some coffee early in the morning and found a funky little coffee shop right around the corner doing fresh pour overs. The coffee was really good and exactly what I needed to get the brainwaves flowing after a late night travelling. Work went well and we closed our laptops around 2pm ready to start our first of four weekends in Vancouver.

First order of business was to find food for a late lunch. One of the things that excited us about being on the West coast was discovering just how fresh all the seafood would be. With that in mind we decided on a poke restaurant for lunch. Poke is a dish of chopped up raw fish served over a bowl of rice with various toppings and sauce. There was a highly rated poke shop, Pokerrito, a short walk from our condo through downtown Vancouver. The fish was fresh, and it was delicious.

We swung by the Vancouver Tourism office to get some ideas for future activities we could do during our stay. They had a beautiful space and well stocked with brochures and pamphlets, not to mention the extremely helpful staff. It was getting late in the evening and we were both quite tired and decided to make something simple for dinner and get to bed. 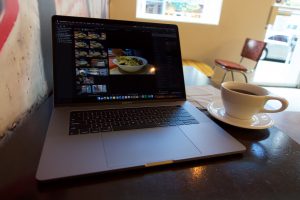 Saturday was supposed to be rainy, we decided to do some indoor activities, mainly shopping. After a return visit to the same local coffee shop to start my day while Nicole slept in (we are definitely not on the same sleep schedule), we both headed out for lunch. Nicole chose a restaurant serving tendon, a Japanese tempura dish. Fantastic!

After lunch we stopped into Pacific Centre, a large shopping mall, for a look around and to mainly escape the light rain that had started. We enjoyed leisurely strolling the mall checking out the odd shop. We may or may not have made a purchase or two.

It was nearing dinner time and we had decided to make dinner back at the condo. We didn’t have any food so we had to do some shopping. We found an H-Mart, which is a Korean based grocery store, and an IGA close by. We wanted to keep the seafood experience going and decided on pan seared shrimps in a simple sauce of butter and garlic served over rice. And Nicole found some tiny salad shrimp at IGA and felt like making a shrimp and mayo sandwich. It all was delicious, and the shrimp blew us away. They were plump and firm and tasted exactly how you would imagine shrimp to taste. So far the promise of fresher seafood on the West coast of Canada is being realized.

And so begins our new experience and series. We hope you enjoy this new series as we document our time here in Vancouver.