We had a good start to the day in episode 1 and after a great sushi lunch we were off to part two. We decided on another suggestion from our Airbnb host, a right of passage of sorts for adventurous Vancourites he said. It is also famously part of the training camp for Vancouver’s hockey team, The Canucks. It sounded grueling, but we were up for the challenge!

The challenge ahead of us is called The Grouse Mountain Grind, or The Grind for short. It’s a grueling hike up Grouse Mountain nicknamed Nature’s Stairmaster. After we finished up lunch we jumped in our rental car and headed over to the base of Grouse Mountain, mentally preparing for what was ahead. Nicole was feeling confident and excited, I was a little more concerned about what was about to happen. As we drove into the parking lot we saw signs indicating The Grind was closed, still too much snow on the mountain. We naively didn’t believe the signs. From where we stood snow was not a problem. We didn’t want to believe it! We drove around the parking lot and found an open office and Nicole ran it to get the lowdown from a person. As she walked out back to the car I saw the dejected look on her face and knew the signs were not lying. We had a fail on our second activity for the day. 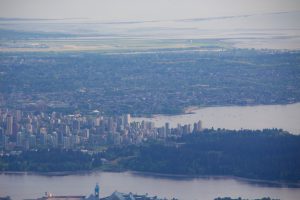 We parked the car and sat for a moment regrouping. We still wanted to go up to the top, but were not overly excited about paying for the gondola that takes you up to the top. But Nicole discovered a Grouse Mountain hack, other than taking The Grind. There is a restaurant at the top, which is supposed to have great views down, and with a reservation includes the trip up and down on the gondola. The restaurant had good reviews and we decided to salvage our Grind experience with dinner at the top.

Once we made reservations it was easy and clear to get up. Go to the gate where you would purchase your tickets, let them know you’re going up for the restaurant and away you go. As we started to ascend in the gondola, officially known as The Skyride, we were both very happy we decided to visit the top. The views kept getting better and better the higher we went until we had amazing views down over Stanley Park, Downtown Vancouver and freighter ships heading out to sea. It was breathtaking and another excellent vantage point for BC’s beauty.

As we got off the Skyride and started to get our bearings we noticed something frustrating, hikers were walking out of The Grind trail. What the heck? We thought it was closed. I guess closed was an unofficial closed and if you were brave enough you could grind it out through the snow. Our only conciliation was that these hikers were more stumbling out of the trail than walking. And instead of spending all that time slogging it up the mountain we could explore the top as there appeared to be quite a few activities to checkout. 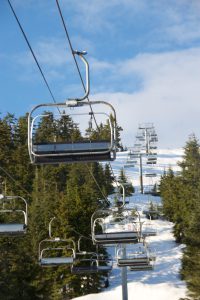 There was still quite a bit of snow up on the top, so much in fact that some of the ski runs were still open and there were people skiing up there. We decided to follow a trail which seemed like a snowshoe trail around the top. The snow was packed enough that we didn’t need snowshoes and were able to explore. We came across an area which appeared to be for maintenance, there were a lot of maintenance machines and a whole park of snow making machines shutdown for the season. We also found a zip lining platform which was being repaired at the time. 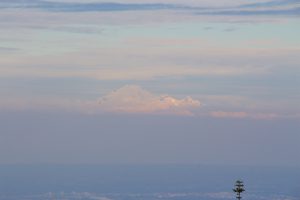 It was all very reminiscent of our visit to the closed ski resort in Zao Onsen Japan the previous year. As we continued to follow the path the scenery opened up and we were able to get a magnificent view, and if we looked careful could see another mountain in the distance. As we took in the sight a couple from the US caught up to us and between the four of us figured that the mountain we could see was Mt. Baker all the way in Washington State. 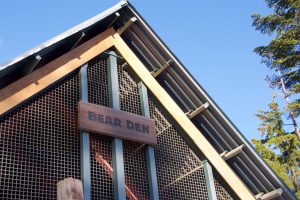 The final stop on our walking tour of the top of Grouse Mountain was a bear habit housing two foster grizzly bears. Coola and Grinder were both found as cubs, separately, and brought to Grouse Mountain. Their habitat was constructed in cooperation with the government and Grouse Mountain must house and care for the bears for the rest of their lives. The habitat is pretty fancy, their indoor facilities looks like a chalet from the outside, and they have plenty of room in their pen to move about. Unfortunately they were being lazy when we visited and didn’t emerge from their chalet. There was a staff member there at the time and she mentioned that this was unusual for the two as they generally come out at dusk. We hung around a bit hoping to get a glimpse, but eventually had to abandon the bears in order to make our dinner reservation.

The Observatory restaurant at the top of the mountain, right beside the Skyride, has an amazing view. We were quickly seated upon arriving and while we didn’t get a direct window seat it wasnt’t hard to enjoy the view. The restaurant was clearly centered around all the large windows looking down from the top. Almost a bonus on top of the ride up and the views was the food itself, which was delicious. They could easily phone it in with the other perks the restaurant offers, but instead they were cooking up some really excellent food. It was a perfect way to close out our day of tourist adventure. We sat enjoying the food and view while discussing the activities of the day.

Once we finished up dessert we strolled over to the top of the Skyride and took the trip back down, a little less scenic in the late evening as the sun had set. Despite that the remaining sun outlined the mountains around us creating a beautiful scene of black mountainous shapes against at deep dark blue sky.

Thanks for following along on our full day of exploring. If you missed episode 1 you can catch it here.