We have the habit of ignoring the immediate neighbourhood where we’re staying, whether it be a longer stay like this time, or even if it’s a short stay at a hotel. We always have this sense that we have to travel away to visit restaurants, shops or sights. It’s a weird habit I can’t really explain, but for the next few days we decided to explore the neighbourhood in which we were living, Yaletown.

Yaletown is one of Vancouver’s more hip neighbourhoods, it’s current incarnation coming to life after the World’s Fair hosted partly in this area back in 1986. Since then there has been major redevelopment of the area turning what was a rather derelict area of Downtown Vancouver into the happening place you’ll find today. The neighbourhood is full of cool coffee shops, trendy restaurants, sought after lofts and condos and green spaces including the large David Lam Park.

Part of what makes Yaletown a cool place to explore is the old warehouse district where you’ll find old warehouses which have been converted into trendy restaurants, cafes, shops and lofts. It’s here where the history of the area can still be felt, which dates back to the gold rush days of the late 1800s. As the Canadian Pacific Railway continued to push into the city proper, and because of it’s proximity to False Creek, which provided a large sheltered bay connected to the ocean, Yaletown became heavily industrialized. The warehouses are a glimpse back to those industrialized days, long been replaced by one of North America’s largest urban redevelopment projects. 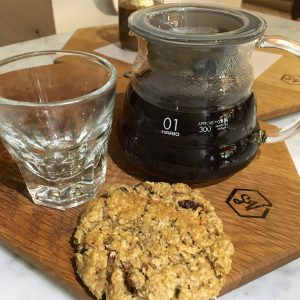 For two days we spent our time after work exploring mainly the various cafes in Yaletown finding a real gem in Small Victory Bakery. Small Victory is a large space which is mostly an open kitchen pumping out delicious baked goods and a small seating area where you can enjoy the fruits of their labours. They also prepare some mean pour over coffee and various espresso based drinks. We really fell in love with all aspects of this place, the food, caffeine and the amazing space.

We almost were able to explore another neighbourhood of Vancouver with a long history, Gastown. Unfortunately the weather turned and our planned exploration of Gastown had to be postponed. We did drown our sorrows in big bowls of noodles at a little restaurant we happened upon as we headed home from the soggy Gastown. This place is a hole in the wall, but they pump out some of the best noodles we’ve ever had. I’m generally not a big noodle fan, Nicole is usually the champion of these types of places, but the food won me over. The noodles were perfectly soft yet chewy and somehow were able to be the perfect vessel for the fantastic sauce. The sauce just clung to the noddles which I think is a good indicator of an excellent noodle. If you’re slightly into noodles and you find yourself in Vancouver give Kung Fu Noodles a try, they’ll turn you into a raving noodle fan. 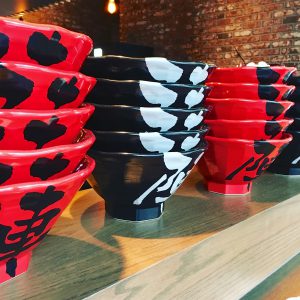 The weather on the following day was equally gloomy and we decided to take advantage of that to plan an indoor activity. It was the perfect night for a hot bowl of ramen followed by a movie, a mid-week date night. We’d passed Jinya Ramen Bar many times as we walked up and down Robson Street. There always seemed to be a line out front which is generally an indicator of delicious food inside. Since our schedules are a bit odd we figured we might get lucky and avoid lining up. While the restaurant was surprisingly busy for late afternoon we managed to get in without a wait and were slurping delicious ramen in no time. We got seats at the open kitchen and were able to watch the frenzied action that takes place during the prep of ramen. The ramen was exceptional, we both thoroughly enjoyed our bowls. The noodles were perfectly cooked, the broth was rich and delicious, but the star of the show for both of us was the egg. The ramen egg was outstanding, the yolk had the perfect consistency, almost jelly like.

Guardians of the Galaxy Vol. 2 came out while we were in Vancouver and that was the movie on deck for us this evening. Scotiabank Theatre was a short walk from Jinya, once we got there we found it virtually deserted. There was only one other person in the cinema waiting to watch the movie. We got our snacks and settled in for round 2 of Guardians, and we loved it! By the time we’re sharing these videos we’re way behind the times, but 10 out of 10. Guardians Vol. 1 was the first Marvel movie which I questioned how they’d pull off and if it was to be their first flop. I was way off, and I was happy to see they pulled it off again with the sequel.

After the movie we headed home making a quick grocery stop to pick up a few things for dinner.

We hope you enjoyed the shenanigans of our second week in Vancouver. But stay tuned, there is still Friday to close out the week, and the day we’ve been waiting for since we settled in 2 weeks prior.