Our plan for the day, visiting Tennoji Temple and it’s accompanying Yanaka Cemetery followed by Nezu Shrine turned into a full blown temple hop. It was beside Yanaka Cemetery that we found a delightful little residential neighbourhood full of little temples to explore. It really stretched out our day as we couldn’t resist taking a look at every temple we came across. By the time we reached our final spot for the day, Ueno Toshogu Shrine in Ueno Park, we were quickly losing light, again. It seemed a day time visit to Ueno Park was not in the cards on this trip.

The day started off exactly the same way as the previous day, breakfast at McDonald’s. Somehow I let Nicole convince me we needed another visit to the Golden Arches, well, I know exactly how she convinced me. The lure of another deep fried apple pie instead of a hash brown. It retrospect it wasn’t all that hard to get me into McDonald’s. Another repeating trend was us getting started on the day a little later than we had wanted. We were of course fully adjusted to the timezone change by this point, but perhaps we were still catching up on sleep from the early part of the trip. Getting up early was very difficult.

Once we finally got out we headed to Shimbashi Station where we took the JR Yamanote line to Nippori Station, our gateway to the Yanaka area. It was here where we would find Tennoji Temple, a very short walk from the station. It was so close that we could hear the familiar chime warning of approaching trains.

Tennoji Temple was more breathtaking that we had imagined. It is not an overly large temple and complex, but did have a beautiful garden and several statues throughout, including a famous bronze Buddha statue. It was very peaceful, other than the odd train passing by down at the station, our visit was very quiet. We lingered for quite awhile exploring the modest gardens, taking in the grounds from all angles. I also managed to capture much of the grounds on video. 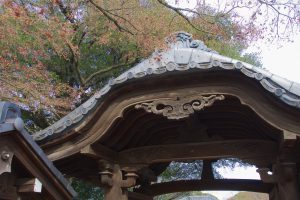 The Buddha has a happy and serene look to his face as he sits atop his podium legs crossed, hands in prayer. I sat on a bench and studied the Buddha while I took a moment of peace. As with most of this trip, we were extremely lucky with the weather, which created a vibrant blue backdrop for the statue in front of us.

As we were getting ready to head out another pair of exploring tourists wandered into the grounds. We exchanged smiles and left them to enjoy their tranquil time with Tennoji. Our next stroll would take us through the adjoining cemetery, Yanaka Cemetery.

The cemetery once was joined and associated with Tennoji Temple, but during the Meiji Restoration they were separated. The government wanted to reduce the significance of Buddhism in Japan in favour of Shintoism. The cemetery is rather vast with a mix of wide paved walkways and smaller cobblestoned pathways leading off to various groups of graves. It was not as peaceful, it seemed to be a popular place to come out for a stroll, helped likely by being joined with the very large Ueno Park to it’s South. 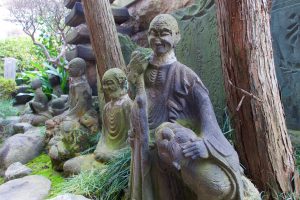 Other than wandering aimlessly through the cemetery there is one specific spot wewanted to see. It was the remains of a pagoda that once stood close to Tennoji, also once a part of the greater temple complex of years long past. All that remains are the granite foundations of the pagoda as it was burnt down. It is an odd tale, that of the destruction of the pagoda. Back in 1957 a young seamstress and an older married man were having an affair and to atone for their sins decided to burn themselves to death in the wooden pagoda. There were some pictures of the pagoda before the fire, on fire and after the fire which we captured and included in the accompanying video.

It was getting late in the morning by this point, perhaps it was already early afternoon, and we needed to make a move to our next destination for the day. We decided to take a route through a small residential neighbourhood adjoining the cemetery. According to Google Maps there were several smaller temples we could explore throughout the neighbourhood. We spent a lot longer making our way through this neighbourhood than we planned, it seemed we came across a new temple to check out at every turn we made. They were all slightly unique, some very small and quaint, others a little larger with gardens and cemeteries on the grounds. We must have explored 4-5 temples until we found our way to the main road which would take us out of Yanaka and on our way. Before we were fully free of Yanaka we came across a temple on the main road with a large and impressive standing golden Buddha statue. We couldn’t resist walking to the back of the grounds to take in the sight of this statue. 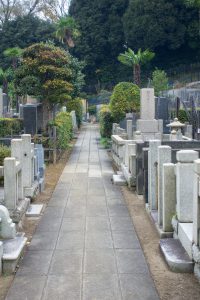 By this point our McDonald’s breakfast had long worn off and we were getting hungry. As we made our way along the major road towards our next stop we came across a little Chinese restaurant. Nicole had been craving Chinese food and so we decided to give it a try. It was a little hole in the wall type place, but boy did they make some tasty food. Nicole ordered a bowl of noodle soup which was an interesting cross between a Chinese style noodle soup and a bowl of ramen. I opted for the mapo tofu, a dish of tofu and minced pork in a spicy red sauce. I often go to this dish when we are somewhere new so I can see the contrast of how it’s made back home. My meal came with some Chinese style gyoza and Nicole’s came with a plate of fried rice. It was a lot of food which we quickly devoured partly due to hunger and partly due to our schedule.

It wasn’t long that we were on our way after lunch that we came across a taiyaki place and I couldn’t resist their fish shaped, red bean stuffed cake. It was delicious, and quite a bit different from the taiyaki I had the previous night. The batter was thicker and the filling a little sweater. 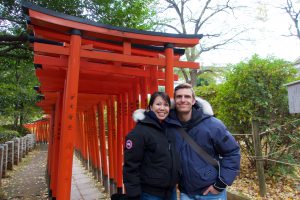 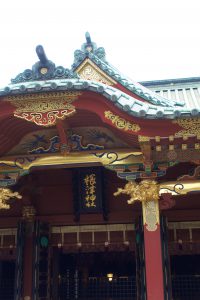 We finally arrived at our next stop, Nezu Shrine. A Shinto shrine, Nezu is one of the oldest places of worship in Tokyo. It is located on very large grounds, feeling more like a park than a shrine complex. It is full of large trees, gardens, a large pond full of koi and several pathways lined with brilliant orange torii. It was actually the torii that drew us to the shrine as they looked incredible in pictures we had seen. But the shrine building itself, along with the shrines two storied tower gate, are incredibly beautiful. Very lavish and ornate in their use of colours, carvings and gold leaf. They were built in a similar fashion as a famous shrine in Nikkō, Nikkō Tōshō-gū.

We spent quite a lot of time at Nezu Shrine, strolling through all the torii, watching the koi swim around and people watching around the shrine itself. Along with the feel of the grounds being a park, it seemed to be used as a park. Lots of people were walking through, playing with their dogs, or sitting on benches scattered around. It was one of those amazing places where you forget you’re in a large city.

The day was winding down and we had one more sight to visit, some of the spots in Ueno Park which we had missed the day before. If we were not quick we would miss it all again. We hurried over to the park and found our way to Ueno Toshogu Shrine where Tokugawa Ieyasu, the founder of the Tokugawa Shogunate, is enshrined. It was very reminiscent of Nezu Shrine in structure and style, also a very lavish construction. Amazingly much of the original buildings, dating back to the early 1600s, survive to this day. By the time we reached this shrine the sightseeing day had pretty much come to a close. The sky was quickly getting dark and we were only there for about 15 minutes before they started playing the “we’re closing” music and we had to leave the immediate area around the shrine.

There was one last spot to see as we headed out of Ueno Park, a temple on an island surrounded by ponds. It is a Buddhist temple and by the time we reached it the sky was pitch black but luckily the buildings of the temple were lit up brightly by flood lights. There is one specific building, an almost mini pagoda of sorts which is well known for the area. From a distance it appears to hover over the pond. We didn’t spend much time at the temple, mainly just taking some pictures as we continued to walk out of the park.

All that temple and shrine hopping left us really hungry, and we had BBQ meats on the brain. On previous trips we always had luck finding a Japanese BBQ restaurant in Kabukicho, Tokyo’s red light district. We grabbed the subway from Ueno Station over to Shinjuku Station, located just South of Kabukicho. It wasn’t long before we found a small little restaurant offering small charcoal BBQs at the tables with a large menu of various meats and organs available for grilling. We devoured quite a few plates of meat as we sat and reflected on our amazing day. So much of what we saw was pleasantly unexpected and it always feels so good to have such a successful day. We were both blown away by the Yanaka area, the cute little neighbourhood we strolled through, with it’s large number of temples, had us day dreaming of what it would be like to actually live there.

Food gone, charcoal fading I paid our bill and we strolled back to Shinjuku Station to catch a train back to Shimbashi and our home away from home in Tokyo. We had 2 more full days and we were desperate to end our late mornings and make the most of our last few days. Or course we had to make a final Family Mart run for the day as we walked to the hotel through the Shiodome underground. We slept very well that night.