Strolling through city streets, turning a corner revealing a beautiful shrine complex, nestled in the neighbouring modern buildings never ceases to amaze me. It is such a stunning mix of new and old, and often times once you pass through the gate into the complex a sense of tranquility comes over you while the busy city buzzes outside. This experience was repeated as we visited Osaka Tenmangu Shrine.

As we walked to the shrine we were aimlessly following Google Maps talking amongst ourselves not paying much attention to our surroundings. We made our last turn down the street which led to one of the gates into the shrine complex and both went silent and took in the sight in front of us. As I mentioned in the opening of this post, that never gets old and I love the architecture of the old structures in Japan.

The shrine is dedicated to the Shinto deity of scholarship, Sugawara Michizane. There are several shrines dedicated to this deity all over Japan, but of them all, this shrine is one of the more important ones. This shrine was originally founded in 949, has seen several reconstructions over the years, mainly due to fire, the current main hall dates back to 1845.

The grounds are beautiful and dotted with smaller shrines all around the main hall. It seemed to go on forever, every time we decided to head out we saw a new corner to go explore. Some of the highlights other than the main structures themselves, were a row of red torii leading to a small shrine and a feature we’d never seen before at a shrine, a covered wooden bridge leading from one hall to another. 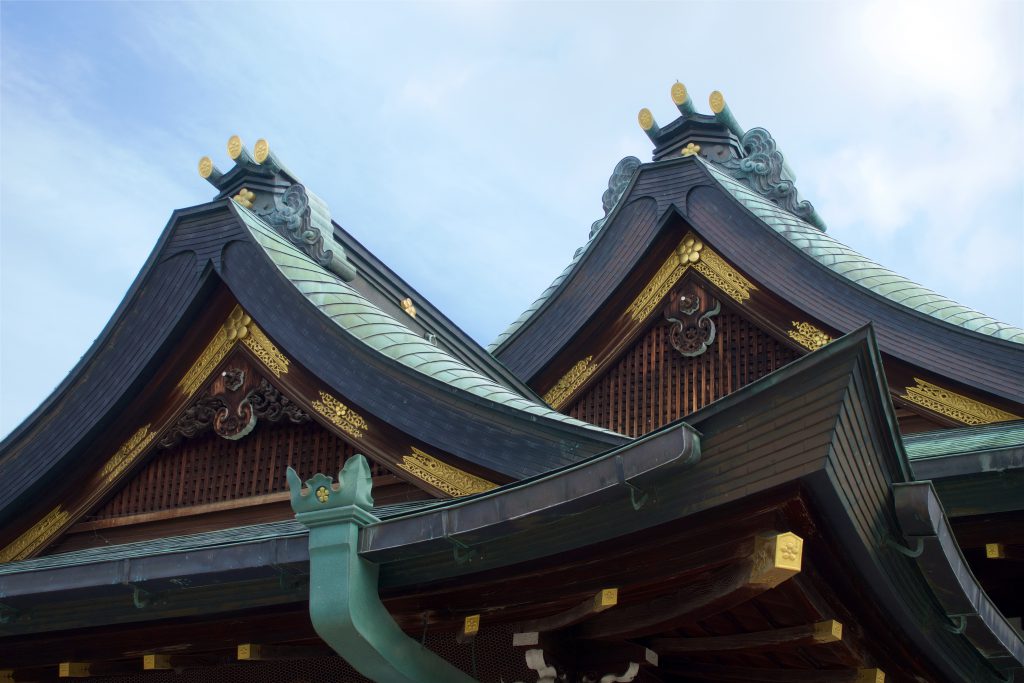 Another amazing thing not to miss is a hallway of dioramas detailing the life of Sugawara Michizane. It is easily missable, to our eyes not well marked. We stumbled upon it by accident and were glad we did as each diorama is amazing in it’s own right. There is a concrete structure to the left of the main hall and the hallway runs the length of it.

Once we had seen every little corner of this shrine complex, or we at least thought we had seen, we decided to head to our next destination Tenjinbashi-suji Shopping Street. It’s supposedly the longest in Japan, almost 2km of covered shopping arcade. We did not manage to cover the whole distance, it definitely did go on and on. The arcade breaks at major roads along the way and each entrance/exit of the arcade to the crossing of these major roads are unique. One of my favourites had 4 samurai warriors overlooking all the shoppers coming and going. They were quite the site! 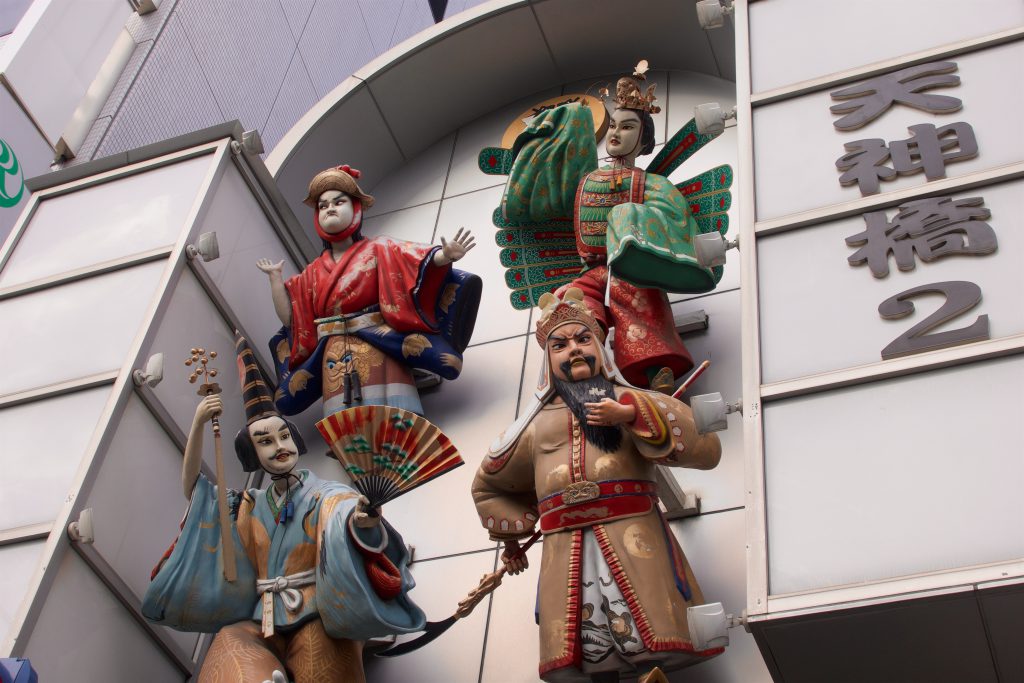 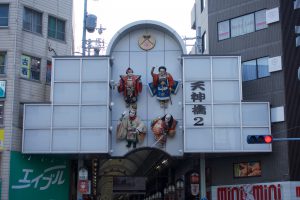 It was on Tenjinbashi-suji where we finally found a meal I had been looking forward to for months leading up to the trip, okonomiyaki. We had okonomiyaki on our very first trip to Japan in 2007 while visiting Hiroshima. Back then we had no clue what we were eating or the history of the dish. All I knew was that I really enjoyed it. Unfortunately, Nicole not so much. Okonomiyaki is a type of pancake filled with ingredients said to have originated in Osaka. It is also a popular dish in Hiroshima which has it’s own spin. In Osaka the batter and all the ingredients, generally meat (pork belly mostly), seafood such as squid, octopus and shrimp, vegetables and even sometimes mochi or cheese, are all mixed together and then cooked on a teppan (a griddle) in a pancake shape. Hiroshima on the other layers the okonomiyaki on the teppan starting with batter. Once it’s cooked it’s topped with various ingredients such as Japanese mayo, okonomiyaki sauce, bonito flakes, and seaweed flakes. It’s a real meal, I was stuffed after lunch. 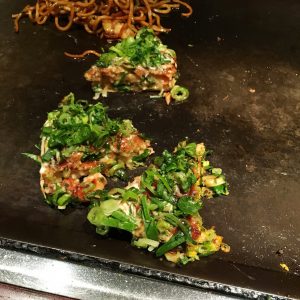 The restaurant we found was really neat and old school. Shoes were removed at the door and stored in cubbies, the table had sunken seating, and it was all dark wood. The waitress was very friendly and helped us make our okonomiyaki. We’d recommend this place, the location is marked down below.

After lunch and a bit more strolling along the arcades we decided to head back to the hotel for some R&R. We love our trips, all the hustle and bustle and exploring, but sometimes we need to put our feet up and relax a bit. Our hotel has some amazing amenities we wanted to take advantage of. They have a really impressive gym and a large pool, and we made use of both. There is also an onsen type experience which I did not try but Nicole explored and found it to be quite amazing and quiet. For the most part we were alone in enjoying the gym and pool. We ended up relaxing a little too hard, and before we realized it day had shifted to night. We got ourselves together and headed out.

First up for the evening was a visit to a shopping area, the main draw was to visit the Osaka flagship store for Uniqlo, UNIQLO Shinsaibashi. It was supposed to have an amazing display on the building, and it sure did. The entire outside of this multilevel building covered in panels which are individually controlled for colour, and the patterns going on were mesmerizing. As was the mannequin display which had mannequins travelling up the centre atrium of the store. We probably (well me mostly…) spent too much time staring at the spectacle. From Uniqlo it’s a very short walk to a major shopping street which houses all the high end brands. The street itself is beautifully decorated, all the trees glowing with lights, and many of the stores had impressive lighting similar in nature to the Uniqlo. Nicole had read that all the stores are in competition with each other to have the most impressive lighting displays.

We didn’t spend too much time in this area as we weren’t actually shopping and started to get hungry for dinner. I had kushikatsu in mind, a type of skewer, breaded and deep fried. The ingredients vary from meats, seafood, vegetables and even cheese. There are three main varieties of kushikatsu and Osaka happens to be one of them, Tokyo and Nagoya the others. We figured we’d have luck finding a place in Dotonbori and that was our destination.

We approached Dotonbori from a different direction on this visit and came to the canal looking down towards Ebisu Bridge which is right in the middle of all the neon and glowing displays including the famous running Glico man.

We were starving by this point which led us to make a fatal decision, well, fatal for our satisfaction not our lives luckily. We took the easy road which led to mediocrity. For the first time ever we decided to go with one of those people pushing their restaurant on the street. We see them all the time, yelling and holding menus, trying to encourage passer bys to go dine at their establishments. We’ve always avoided them, mainly because we can’t understand them I guess, but also because we generally have an idea where we want to go. But we hadn’t picked out a place and we were extremely hungry so we decided to go for it. This particular person was representing a kushikatsu restaurant and once we agreed to go she summoned someone else who led us to the restaurant.

As we started to follow the guy we began to wonder if we had made a mistake, but we were hungrily optimistic so we continued on. The farther we went though the more worried we got. This couldn’t be a good sign. It was only about a 5 minute walk but it felt like an eternity. Once we arrived and walked through the door we knew for certain we had made a mistake. The place was completely empty, save for the employees. There was still a hunger induced glimmer of hope so we perused the menu and ordered a selection to test the waters. When our plate of skewers arrived we both sighed a little bit of disappointment. We ate our skewers, not horrible, but not the best kushikatsu we’d ever had. Nicole summed it up perfectly in our recap of the experience in the episode. It wasn’t bad food, but when you get used to pretty much always finding food that exceeds expectations all over Japan this becomes a miss. And to be fair I had extremely high expectations. I was looking to relive an experience we had on a previous trip where we found some of the best kushikatsu we’d ever experienced, so much so I still rave about that almost 8 years later. This was the first time we ever followed someone to a restaurant tucked away from the hustle and bustle, so I can’t comment directly on this being the norm for this sort of experience. But in recounting this story to some friends who have also travelled in Japan, they recounted a very similar meal. We’ll never attempt this again on future trips.

We finished up our skewers and headed out to find round 2, and it wasn’t long until we found our next course. Takoyaki!! Takoyaki is another Osaka favourite, little balls of batter generally filled with octopus and cooked on a specialty pan allowing for the round shape. They are delicious and we found a really great place. It was extremely busy and they were pumping out takoyaki like crazy. These are also not really a Nicole approved food, but unfortunately for me, these takoyaki converted her and I lost half my balls. On the plus side, hopefully in the future it won’t be too hard to convince her to go for takoyaki.

After our two course meal we strolled around Dotonbori for a little bit, taking in all the fun mascots clad over the top of restaurants. It’s such a wacky little corner of Japan. And with that we called it a night and headed back for our slumber.