After devouring some amazing strawberries we picked up from the Hakodate Morning Market we headed out for an afternoon of exploring. We decided to explore the Motomachi area of Hakodate and we started to see the real beauty this city has to offer.

The Motomachi area was a preferred area for foreign traders from the West, China and Russia, many setting down roots after Hakodate was opened to foreign trade in 1854. It’s a lovely area to come for a stroll as within short distances of each other you will find many beautiful buildings, and an interesting melding of Western, Russian and Japanese architectural styles.

We started our afternoon stroll up Hachimansaka Dori which was a good test for our aerobic system as it was a rather steep hike up. The benefits of the effort making our way up to the top were wonderful views back down over Hakodate’s port.

At the top of Hachimansaka Dori we took a left along Minatogaoka Street, on which it was a very short walk to our first top for the afternoon the Russian Orthodox Church. 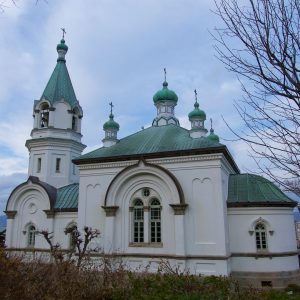 Up a short flight of stairs sat this beautiful white building with green onion domes hinting at it’s origins. It is housed on immaculately maintained Japanese grounds, providing an interesting juxtaposition with the Russian architecture of the church. Inside Nicole found a relatively small place of worship, she counted about 20 chairs for it’s perishiners. The church had an impressive view from it’s vantage point on the hill and I could only imagine how great the view would be from it’s bell tower. Incidentally the bells from this church were taken during World War Two as metal was a scarcity in those days. They had since been restored thanks to a generous donation of a single donor and have been given the title of one of the hundred sounds of Japan. 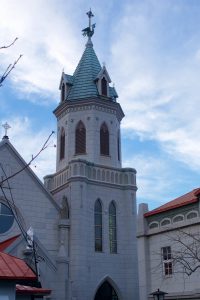 Right around the corner from the Russian Orthodox Church we found the Catholic Hakodate Motomachi Church. Another stunning building, but no longer as it was originally built. The original building was wooden and had been destroyed in fire and rebuilt several times before it was finally built in stone. It’s information placard proudly declared it was now fire proof. Nicole went for a peak inside and came back very happy that she did. A cozy little church which really struck a chord with her. 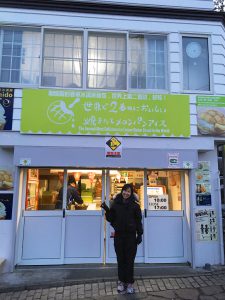 As we headed back the way we came along Minatogaoka Street towards Motomachi Park we came across an interesting ice cream sandwich shop with some clever marketing which drew us in. Claimed to be the second best melon bread ice cream in the world. Second best? We found this proclamation a little odd, but after devouring one of their melon bread ice creams we wondered where was THE best, as this one was delicious.

From the ice cream shop Motomachi Park was only a few steps. It is a good size park, housing some more old buildings while being watched over by a massive yellow and white building which glows on the hillside at night. This building is the old public hall of Hakodate, and it was quite impressive. We took it in for a bit before heading down into Motomachi Park for a quick look around. The sun was setting and from the top of the park we had another incredible view down over Hakodate’s port with beautiful pink clouds in the sky.

After a quick pitstop at the hotel we went to explore the Kanamori Soko Warehouses, better known as the red brick warehouses. There is a good mix of shops selling all manor of wares, not just the touristy stuff I was expecting. From clothes to appliances to toilet seats the warehouses seemed to have it all. And of course, food! We couldn’t help ourselves when we both found soft serve which spoke to us. I tried a kabocha squash soft serve while Nicole had a black sesame. Both were stellar but were not enough to hold off the brewing hunger we were developing for dinner.

It was our last chance on Hokkaido to try soup curry, and lucky for us there was a restaurant right across the street from our hotel. Not only would we finally get some soup curry, but we’d also have one last go at the Genghis Khan, as they call barbecued mutton. The soup curry was a little different than we were expecting as it had a much more Indian curry flavour than the Japanese curry we expected. It was very good, and a perfect meal to end a chilly day exploring Hakodate.