As you may have noticed from our videos we enjoy eating, a lot. And we generally do quite a bit of research on food in preparation for a trip. Trying to find local specialties and restaurants doing something amazing or different. You might have already guessed our trip to Vancouver was no exception. We researched quite a lot looking for excellent food.

One of the ways we enjoy researching is a rather lazy approach to doing said research. That is watching other people on YouTube and following in their footsteps if the places they visit look alluring enough. One fellow YouTuber we enjoy, and someone who usually visits some fantastic places, is Mikey Chen of Strictly Dumpling fame. He did a few videos on Vancouver and one place really spoke to us. It is a small little restaurant specializing in Xian food, a Chinese regional cuisine that we love. It was on the list well before our trip and today was the day we would finally get to have amazing looking hand pulled noodles, Chinese burgers and chili chicken.

Fun side note, we actually met Mikey when he came to Toronto. He did a small meet up at Nathan Philip Square outside Toronto City Hall. It was a lot of fun and quite interesting from a YouTube learning perspective. And true to form, he brought food. Lobster to be exact. Leftovers from his visit to Fishman Lobster Clubhouse Restaurant which is famous for their giant lobster piles. 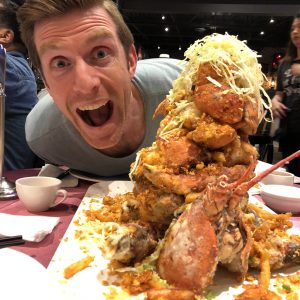 After our work day we headed out to Budget Rent a Car to pick up our ride. While JooJak Restaurant is a bit of a trek out of downtown Vancouver, the real reason we needed a car was for our plans on the following day. But because we had a full day planned the following day we decided to pick up the car on this day so we would be ready to get started bright and early. It just made getting to JooJak a little bit easier.

On the way to dinner I had picked out another coffee place which would also be a bit of work to get to without a car. It was called Pallet Coffee Roasters and reviews of their pour overs lured me to it. It ended up being a really comfortable spot with a cool backyard sitting area and lots of places to work inside. They also had a really cool water heating contraption specifically created for doing pour overs. It was a special handheld wand which was fed constant hot water through a tube connected to the counter. It was pretty neat. And the coffee hit the spot, really smooth and tasty.

After some work and caffeine we took our rumbling stomachs over to JooJak for a Xi’an feast. It was a quick drive from Pallete and we easily found a parking spot right on the main street which houses the restaurant, Kingsway. One little snag, they only take cash, which wasn’t a big deal. After we placed our order I ran down the street to the bank to get some money. So far on the trip we hadn’t had to use cash all that often, so we didn’t get to enjoy the currency perk of being in Canada until now.

It wasn’t long until the food showed up after I made it back. Dish after dish showed up as we moaned and groaned at how good everything was. The Chinese burger blew my mind. A pita type of bread, but a little crunchier on the outside and soft and steamy on the inside, held some juicy slow cooked lamb beautifully spiced with cumin. It was spectacular, and something I crave many many months later.

Next up was the famed chili chicken, the dish repeatedly mentioned in reviews on Google and gushed over by Mikey. It looked fiery and I was a little nervous. Nicole thought she’d have the whole dish to herself. But the spice was just perfect to momentarily set your mouth on fire, but not overpowering enough to take away from the magnificent flavours. We later found out it was a specialty of the restaurant, the cook putting his own special spin on this classic dish.

The dishes we were most anticipating though were the various hand pulled noodles we ordered. The hand pulled biangbiang noodles did not disappoint. Every thing to this point was crazy good, but this was the reason we came. Thin, wide hand pulled noodles served with a meat sauce and plenty of fresh cucumber. They did this dish right, and we devoured it, possibly even fought over it.

Our order was coming to an end, but we were not done. We had to have more, who knew when we’d be back here. I had to try the pork burger, the same crunchy soft bread but this time stuffed with super juicy shredded pork. It was hard to believe but it was so much better than the lamb burger that earlier blew my mind. We also added on another famous Xi’an noodle dish, cold noodles. Perfectly cooked noodles left to cool and then served up with a tasty chili oil sauce which also contained garlic and vinegar.

We debated a third order, but were completely stuffed. I’m in physical pain as I write this, the cravings for a repeat of this night are strong. If you are in Vancouver and you have any inkling towards this type of food you MUST visit JooJak. To top off all the amazing food the husband wife team which runs the restaurant are super friendly and helpful. The wife especially spent a lot of time with us explaining all the dishes and their history. Explaining to us why Xi’an food is so different to most other Chinese food. The use of lamb, cumin and leavened bread is unusual for China, but Xi’an being the starting point of the Silk Road was a gateway for other cultures and had a strong Islamic influence. Mixing of cultures can be a wonderful thing, and in Xi’an their food culture is testament to that.

Overly full we managed to waddle out of the restaurant, content and looking forward to getting home to bed. An early night was in order as we had a long following day. As we headed down the road back to the car panic started to set in. Our car was gone. I was in such disbelief that I continued to walk, sure we just didn’t go far enough. Nicole eventually convinced me we were way past where we parked. I remembered having filmed the numbered meter. I reviewed the footage and we found the spot where our car used to be now replaced with another car. What the heck? My immediate reaction was that our car was stolen, what else could have happened? I dialled the police ready to explain the situation. As I sat on hold a parking enforcement officer came and started to ticket the car that had replaced our car. What? I immediately hung up the phone and realized on inspection that we parked in a spot designated for motorcycles. Argh!

We found the number for the impound lot and gave them a call. Low and behold they had our car, and luckily they were open 24 hours and if we got there before midnight our fine would be reduced. It was about a 60 minute walk away, and we’d still make it there before the cutoff. We debated our options and given how full we were we decided to make the walk, with the side benefit of exploring a part of Vancouver we would have normally missed. Needless to say, we made it to the lot, paid our fine and got our car. Unfortunately by the time we got home it was past 1am and our plans of an early morning were likely spoiled, but that’s a story for another time.