Our time in Vancouver was quickly coming to an end and it was time to turn up our tourist activities. On this Thursday we did exactly that, taking a day off work and heading out to a few tourist spots on the North side of Vancouver. It was the reason we rented a car the day before, and why we lamented getting towed and having a late night. As we feared it delayed the start of our day and we felt a little rough. 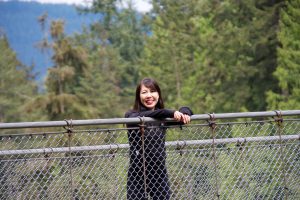 We did get a late start to the day, much later than we wanted to, but we packed up as quickly as possible and headed out. Today we were off to the North end of Vancouver to visit Capilano Suspension Bridge Park. As the name would hint at, this park is famous for its suspension bridge over Capilano River. What we weren’t expecting was the little park of totem poles that visitors get to enjoy on their way to the bridge. There is an interesting variety of totem poles, my favourite one having a large crows head on the top.

The bridge dates back to 1882 but luckily for current visitors it has since been rebuilt. The original bridge from the late 1800s was constructed of hemp rope and cedar boards. The bridge and surrounding area has changed hands several times over the years until the current owner took on the park in 1983. The park you’ll find today started to take form in the 2000s. The Treetops Adventure was added to the park in 2004 and in 2011 the Cliff Walk was added.

The park could easily be explored in a half day visit. There is a lot to see and do, but it’s all contained in a relatively small area. If you linger and take a more leisurely pace, reading all the literature posted throughout your half day could start to expand. The bridge itself is an amazing experience. It’s 140 meters long and is 70 meters above the Capilano River below. As you’d imagine there are great views up and down the canyon and from the bridge you can get a good view of the Cliff Walk. It also sways more than I had expected. Sway is not quite the right way to describe it’s motion, it’s more up and down. Luckily neither of us are afraid of heights, but we did encounter a few brave souls crossing who were clearly a little out of their element. 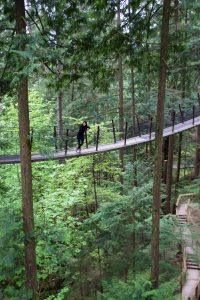 My favourite part of the visit was actually the Treetop Adventure which is a network of seven suspension bridges 30 meters up running between massive old growth Douglas Fir trees. It was definitely an interesting perspective from up in the trees, one you won’t often have. They called it a chipmunk view of the forest below.

The Cliff Walk is also quite amazing, in terms of it’s engineering which leads to a rather hazardous feeling adventure. But it too gives great views out over the canyon and gives some great photo ops, especially if you get just the right angle giving the impression of levitating out over the trees. 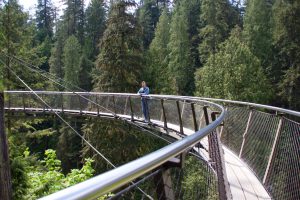 A close second was the area called Kia’palano where you’ll find the totem poles. There is an exhibit where you can learn about the lives of the BC First Nations people. Another great photo op with the totem poles. As you walk towards the bridge you are walking among them, you can get right up to them. Really beautiful artistry.

A Documented Travels adventure wouldn’t be complete without food and we won’t disappoint. Before reaching the park we stopped at a Denny’s which was right on the way, just on the other side of the Lions Gate Bridge from Stanley Park. We always feel a little funny about hitting up a place like Denny’s, but we have to say, breakfast was on point. The restaurant had an old school dinner feel, yet you could tell it was a modern recreation. The staff were very friendly, and the food hit the spot. It was just the meal we needed to get our day of exploring started right.

After working up quite the appetite at the park we decided on a sushi restaurant recommended to us by our Airbnb host, Zen Sushi. We arrived at an odd time, in between lunch and dinner, but they accommodated us, and we had the whole place to ourselves. The food here was outstanding. We devoured our lunch which left us wanting a little more. They definitely are properly presenting the fresh fish on offer on the west coast, and the quality was apparent. The restaurant was also perfectly situated, in between the park and our next destination in North Vancouver.

We highly recommend a visit to Capilano Suspension Bridge Park. You’ll learn some history of the area, see some amazing views, take in fresh air and reconnect with nature for a short while. 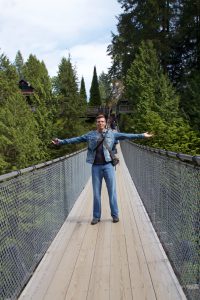 We hope you enjoyed our visit to Capilano Suspension Bridge Park, and that you got a good representation of what you’ll find should you visit. In part 2 of our tourist day out we’ll visit a mountain close by, we hope you’ll come along for that adventure as well.