We’d walked past the stunning Vancouver Art Gallery housed in the former primary courthouse for Vancouver many times exploring downtown. We felt there was a chance we’d get to visit it and today was finally the day. Nicole is always our driving force to go visit a gallery, I’m usually reluctant. This time was no exception, but as usual, I was happy in the end. We didn’t realize it until we were exploring the gallery, but they had a special exhibit that would prove to be right up Nicole’s street.

Before we made it to our gallery visit later in the evening I had some caffeinating to do. I was really excited to finally be able to start my work day at a cafe. It was a goal to get some early morning quiet time where I could live the city life and walk to a local cafe for some caffeine and work. My work schedule was extremely hectic up to this point, mainly filled with early morning calls which kept me at home. But I had finally broken free of that routine.

After work there was more caffeinating to do and we decided to stroll over to a cafe near Gastown. Unfortunately, the place I had picked was completely packed and we had to adjust our plans. We happened upon Milano Espresso Lounge which had a lot of comfortable seating and a decent pour over coffee. We sat in the front window, half working (I was probably trying to edit) and half people watching. It was a nice calm moment to relax before heading out for dinner followed by a whirlwind tour of the art gallery.

We hit strike two with our dinner selection, a poke restaurant. It either was closed or didn’t look as appealing in person as on the internet and so again we had to adjust our plans. Luckily that didn’t require much effort as right next door was a sushi restaurant with an alluring looking menu. We were a little early for dinner and got our choice of table. We chose one in the front window with a view out over the street. Another benefit of the quiet restaurant was that our food came extremely quickly, which was perfect because we were both really hungry. The food matched the menu and we were not disappointed with our spread. A combination of rolls and sushi, all extremely good. We devoured dinner and didn’t linger around for very long as we had plans to get to.

One of the reasons we decided to visit the Vancouver Art Gallery on a Tuesday evening was that they were offering free admission. It’s a regular thing they do on a periodic basis and we got lucky it coincided with our visit. They tend to change these sort of things around so please check their website to see when they are offering this now. 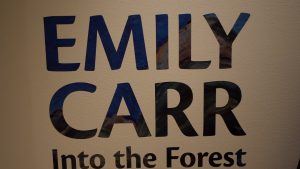 As I mentioned in the intro Nicole is generally the one who wants to check out art galleries on our travels. Almost always I’m reluctant at first but usually won over. Tonight followed that same pattern. The Vancouver Art Gallery has an amazing array of Native American art along with an extensive collection of pieces from the Group of Seven, Canadian art heroes. What Nicole was most excited about was the exhibit of Emily Carr’s work. All the exhibits were well presented and we enjoyed leisurely strolling the halls taking it all in.

Nicole was in for a surprise, something which we clearly could have clued into as they were promoting it with an enormous banner hanging on the side of the building outside. The gallery was hosting a special exhibit of Hong Kong artists called Pacific Crossings. One of the showpieces, and something that captivated us, was a massive video screen of an artist’s depiction of a famous TV series from HK called The Legend of the Condor Heroes. Not only was there the artist’s take on this classic, there was a TV screen setup playing episodes of the show. Nicole was enthralled! It was such a nostalgic moment for her, remembering when she was young and her family would gather around their TV and watch the series together. I had a lot of fun watching her excitement and hearing her recounting stories from her childhood related to this TV series.

After we got our fill, while more accurately, after we were kicked out because of closing time, we headed back home. Nicole was still buzzing from seeing the special exhibit, and I was as usual happy to have been forced to take in some culture. It was a great day, and just the start of what we were hoping was going to be an amazing week.