Part 1 of episode 14 left us struggling with a dilemma as we came across what appeared to be a grocery store on our way to Rinnō-ji Temple. We love checking out grocery stores wherever we travel, but we were running out of daylight and as it would turn out, made the wise decision to press on.

Google Maps was taking us to the main entrance of Rinnō-ji Temple, skirting us around an interesting area on the map. I wondered why there was this vast area with no buildings, other than a few temples and shrines. The map gave no clues and this piqued our curiosity. No Google, we were going to go a different way.

Between us and Rinnō-ji there was another temple and a big section of what looked like open space on the map. We took a hard right, off the plotted route, and started to explore.

This temple was Shifuku-ji Temple, and was beautiful and impressive and would have been worthy of our main destination for the day. It had beautiful grounds, even a small bamboo forest. Maybe not forest, grove? Or perhaps garden? Can there be a bamboo garden. In any event, there was some bamboo trees along the side of a long pathway leading up to the main hall of the temple. We didn’t linger too long though, as we were racing the falling sun.

We walked around the main hall, following a path which led us to their parking lot behind, and it was here where we started to understand what all the open space was. Cemeteries, vast cemeteries in and around all the temples and shrines in this area.

We found a pathway leading off the road which seemed like it would take us through some of the cemeteries to the backside of Rinnō-ji Temple. This is where we really felt like we had gotten off the beaten path, as this pathway took us to the edge of a cemetery and the start of a residential area. We walked along the path enjoying the beautiful views over the cemetery on one side, and out over a residential area on the other. The complex was up on a hill, which gave us a good view down over a more residential side of Sendai. The city around this complex seemed to stretch on forever from our vantage point.

The walk was very peaceful, the area full of large trees, a mix between cedar and pine for the most part. We only saw one other person, a local walking their little dog along the same path we were taking. I wondered if she was surprised to see foreign visitors here, she didn’t let on if she was. 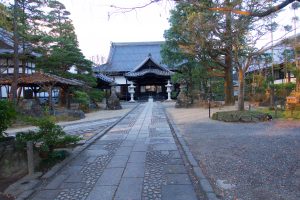 Continuing on, we eventually got a glimpse of the pagoda on the grounds of Rinnō-ji Temple through the trees. We took the first pathway we hit heading in that direction, walking through the section of cemetery which separated us from our destination.

We had made it, but still had to walk around to the front approach where we would find the temple grounds and main hall. It was a beautiful sight and very quiet. There was a bell tower on the grounds flanked by a Japanese maple in all it’s fiery red glory, glowing in the fading light of the day. 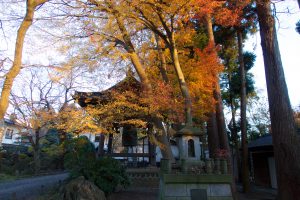 Nicole discovered that they had a large Japanese garden that for a small fee (¥300) we could enter and explore. This was a real bonus, I didn’t know they had such a vast garden. It was beautiful. Full of perfectly manicured trees, bushes and shrubs. There was a large pond with differently coloured koi coming up to the surface. And it was in the garden where the pagoda was located, on the other side of a red lacquered bridge. Beyond the surprise of finding this garden I was blown away that we had it to ourselves, except for a few workmen who were preparing the trees for winter. But halfway through our visit they finished up and left, and we did have this tranquil place all to ourselves. 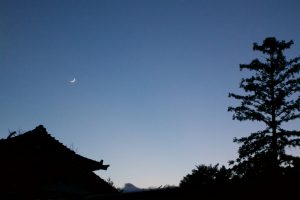 We stayed as long as we could, it started to get dark as we were leaving, and started to make our 1 hour hike back to the hotel. Nicole convinced me to take the same path back, through the cemeteries. I was apprehensive, it was getting very dark very quickly, but I ended up being happy she was persistent, as we connected backup to the main road home through a different temple. It was too dark to film at this temple, it wasn’t well lit, but I did manage to get a shot of the crescent moon over it’s main hall’s roof. It was a fitting view, the crescent moon echoing a symbol of Sendai, that of the famous helmet of Sendai’s founder, Date Masamune.

On the way back to the hotel we managed to stop into that grocery store where we started this episode. We were surprised to find that it wasn’t a grocery store after all, but a massive liquor store. We enjoyed exploring all the liquors, sakes, beer and an impressive array of snacks. We spent a good amount of time in there, picked up a few things and then continued our hike back to the hotel.

Our route took us along Kokubuncho Street, and unlike earlier in the day when it was mostly quiet, it was starting to wake up. All the lights were on, the crowds were starting to mount and the streets were full of guys with menus representing the hundreds of restaurants. We could see the beginnings of what made this the biggest entertainment district in the Tohoku region.

We weren’t quite ready for dinner just yet, so we continued back to the hotel with the intent to come back here for dinner. After freshening up and relaxing for a bit in the club lounge of the hotel the thought of heading back out had lost it’s appeal. We weren’t overly hungry and wanted to get to bed early as we, wind cooperating, wanted to head to Yamedera as early as we could in the morning. But before we turned in, a snack was in order.

We ran across the street to a Lawson convenience store to grab some food and enjoyed a quick bite in our hotel room. We tried their chicken nuggets, two varieties, cheese and spicy. I downed a Sapporo Rich Black I picked up at the liquor store earlier. We were about to call it a night when Nicole somehow convinced me to make a cup of ramen, one of our favourites, cheese curry. With that polished off we got into bed.